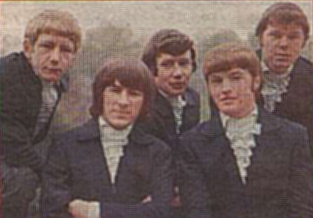 A five piece, R&B band from Glasgow, The Poets adopted their clothing image of high-necked jackets and ruffled fronted shirts (see pic above)
from the main, possibly only, contemporary painting of Rabbie Burns, Scotland's national bard - hence also the name!

The 68-70 line up is the main one of interest to us here on account of its relationship to Blue - see Blue.
Dougie Henderson (drums), Hugh Nicholson (guitar), Ian McMillan (bass), Johnny Martin (keys).

The band name eventually went out of use in 1972 until revived by the original singer George Gallagher in 2011 for a brief period before his untimely death in 2012.
That version also included Frazer Watson and members of the Thanes e.g. Lennie Helsing. 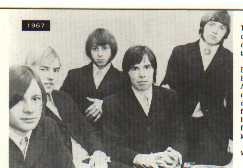 Can't recall who sent us these shots but we'll namecheck you if you let us know or we ever if we find it in the e-mail attachment.
The band were hugely popular in Scotland and were signed by Andrew Loog-Oldham on a visit up there to get married.
Between October '64 and January '66 they released three singles on Decca and two on Immediate.
By the time, Wooden Spoon/In your Tower came out on Decca in February 1967 there were no original members left and Frazer Watson (centre above and not an original himself)
was about to jump ship to the Pathfinders/Jason's Flock. That single also featured Ian McMillan (later of Blue) on bass apparently.
None of the band's releases apart from the first (a No.30) saw any chart action which is a shame since a couple are well worth a listen.
Wooden Spoon has a descending phrase later used on 'Paper Sun' by Traffic though we hesitate to suggest that Stevie Winwood listened out for Poets singles
despite the similarity between the bass on 'Thats the way its got to be' and 'Keep on Running' as well. 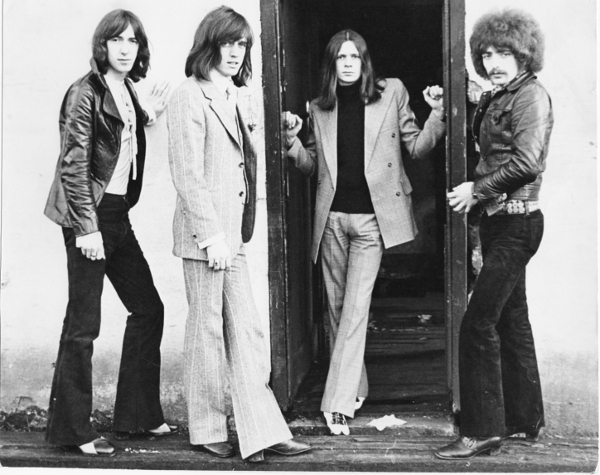 
From 1968 the band continued to be immaculately suited and booted (See Stubbs advert in Marmalade section and pic above) but their repertoire now consisted of spot-on covers of chart numbers, pop classics and some originals by guitarist, Hughie Nicholson.  See the 1967 newspaper article on the Trash web page detailing a bewildering series of band changes within the Poets and other Glasgow bands.  All the '68-'70 Poets with the possible exception of Henderson were great vocalists. The band remained Scotland's top act till the end of the decade as the cutting below from an October 1970 edition of Transplant, 'Scotland's teenage magazine' shows. Note the other names on the list! 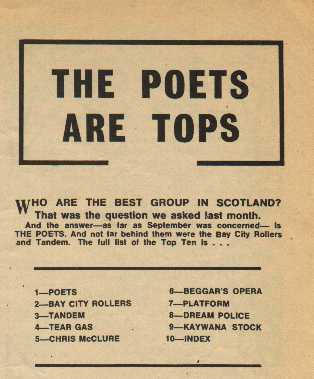 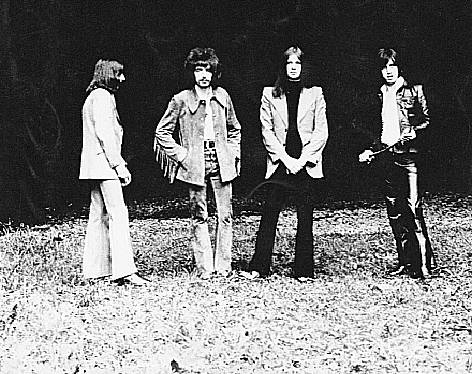 Pic courtesy of Alex Scott
Another snippet (below) repeats a rumour that was then current that the band couldn't release records because of contractual difficulties
but perhaps they just couldn't get a deal and didn't record very much. Certainly there is little from this era on the Poets CD reviewed below.
But what there is is great! Note the mention of the wonderfully named 'Pram' in the clipping below. Recall seeing them at Ayr's Caledonian Hotel ballroom back in the day.
There was a powercut but the show must go on as they say so the drummer knocked out a solo until the leckky was restored. 5 stars that man! 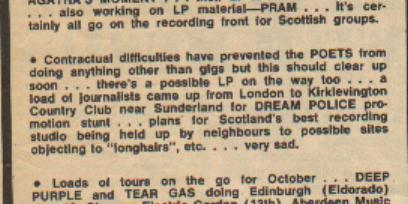 What they did release was a single (Heyla Hola/Fun Buggy) to promote Strike Cola made by Barrs of Irn-Bru fame.
Brian Hogg reckoned that the line-up which made this disc was led by Dougie Henderson but wasn't sure who else is on the tracks.
Well we've seen the prints from the photo shoot for the promo (thanks Matt Nicholson) and the line-up was Hugh Nicholson, Dougie Henderson, Johnny Martin
& Davie Nicholson (Hugh's brother from the Mob) who had replaced Ian McMillan when he joined Trash/Cody.
We also remember seeing the TV advert lots of times on STV. It showed the band recording in the studio
(leading to much speculation that an LP might be on the way but they were probably actually just recording this single).
There were also clips of the band larking about in a dune-buggy in a reference to the B-side. 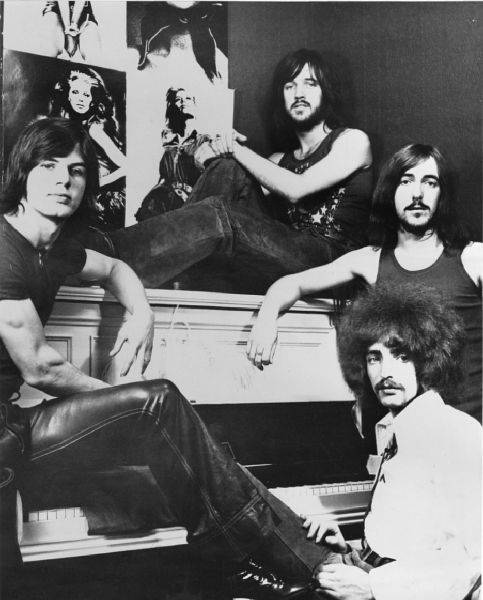 However, major changes were on the way again.
Hugh Nicholson went off to replace Junior Cambell who left Marmalade in March 1971 and the band brought in Hugh Burns (who later became a noted session player).

Davie Nicholson also left -  to lead his own band, 'Nickelson'. An internet search shows they were doing a double header in Nairn and Cullen on 21st May '71.
And there may have been earlier gigs.
The spelling of the band name was presumably to infer that they were indeed a proper band rather than a solo artist with supporting musicians.
David later joined Blue. See the pages on Blue and Nickelson/David Nicholson via these links.
Joe Breen came in from the Bream Police to replace him.

Charlie Smith from the Dream Police replaced Dougie Henderson when he joined Hugh Nicholson in Marmalade.
(For the circumstances surrounding of the sacking of Alan Whitehead see the Marmalade's Decca Years CD notes). 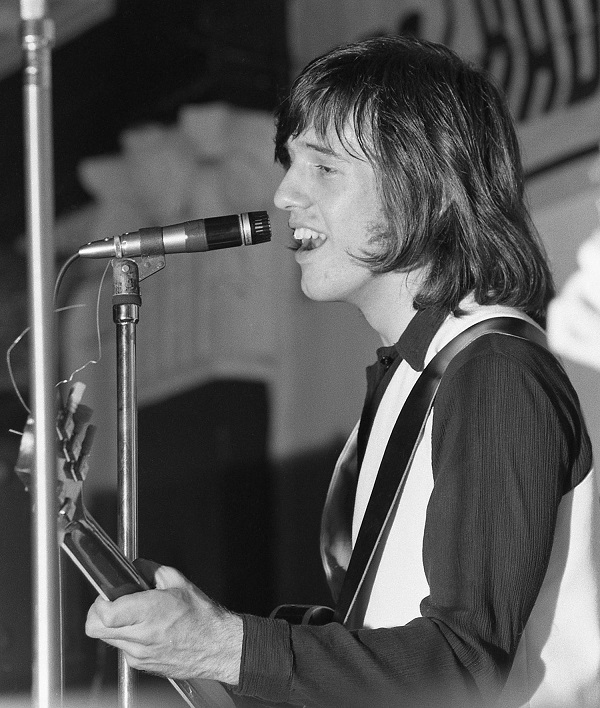 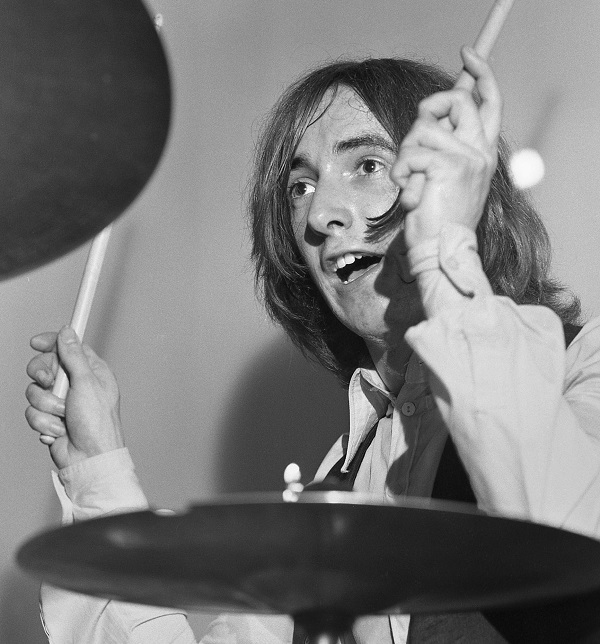 The line-up of Charlie Smith (drums); Joe Breen (bass); Hugh Burns (guitar); and Johnny Martin (keys) carried on the Poets name into '71 or even '72.
We saw them in Arran and just after at Cumnock Juniors football ground in the summer of '71 - we think it was '71 anyway.
We recall them jokingly claiming that they had written their next song on the boat on the way over.
Thy then kicked into 'Liar' by Argent and made famous by Three Dog Night.  Great live version!

In an interview with Guitarist magazine in January 2002 Hugh Burns said, "I moved from Glasgow to London with a group who were signed to Phonogram records.
We recorded an album and several singles, one of which, called 'The Beast Day', received lots of commercial radio play".

Discogs also has this to say of 'Marsha Hunt's 22:
"Marsha Hunt's band, active from 1972 to summer 1973, actually named just '22'.  Before teaming up with Hunt the group was known as 'Silver' ".
So rather than the impression that the group had a contract with Phonogram and moved from Glasgow to record,
it seems more likely that the band changed their name to Silver or Chapter 22 to try their luck in London,
eventually hooking up with Marsha Hunt and securing a recording contract. Ms Hunt had of course previously worked with Scottish musos.

Also, according to Discogs, only two singles were recorded.
1. (Oh, No! Not) The Beast Day / Somebody to Love (Jefferson Airplane cover) - 1973 - on Vertigo i.e. Phonogram.
A-side is an Afro-funk number with a flute solo and a short guitar break near the end - check it out on Youtube!
&
2. Medusa / Bop City - 1973 - on Vertigo i.e. Phonogram.
A-side is a driving rock-pop number with some male spoken sections and several wa-wa guitar breaks. Again, check it out on Youtube.

The album - 'Attention! Marsha Hunt' (1973) - Fontana i.e. Phonogram seems to have been a Germany only issue at the time (later released in Poland).
Several sole and/or joint composer credits go to Breen, Burns and Smith as well as Hunt.
Check out details on Discogs and a couple of tracks on Youtube!

The only mention of Johnny Martin that we have spotted from thereafter is a thank you to someone of that name on the 1975 Nazareth album, 'Hair of the Dog', but not in a playing capacity apparently. However, Matt Nicholson told us that Johnny later worked with Yes then Vangelis and was still with him (2001) he believed.
Good luck to you anyway Johnny. He was great.  Loved it when they did the Clapping Song - 3,6,9, the goose drank wine etc..  Thanks to Matt for his time and info. 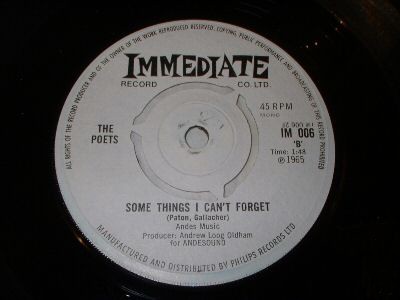 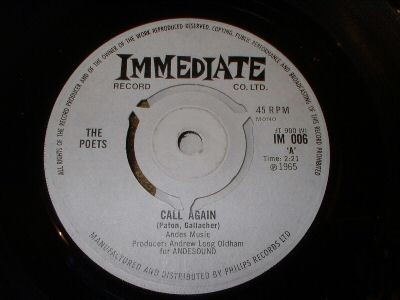 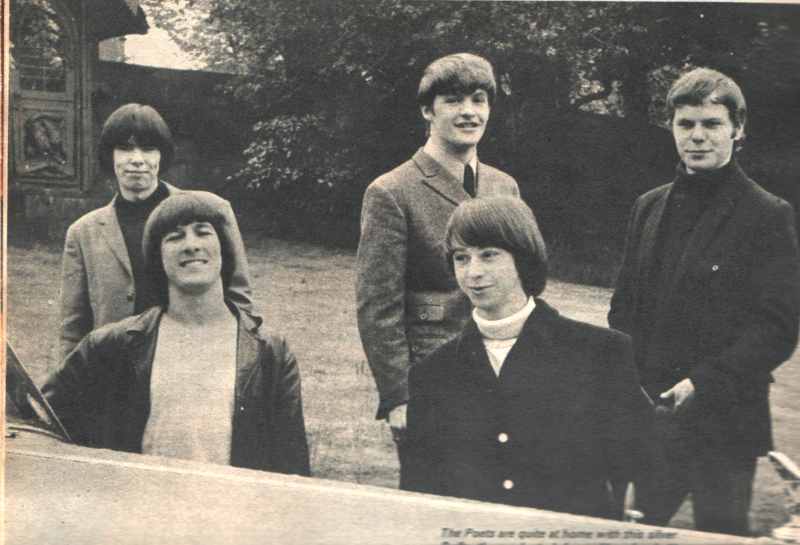 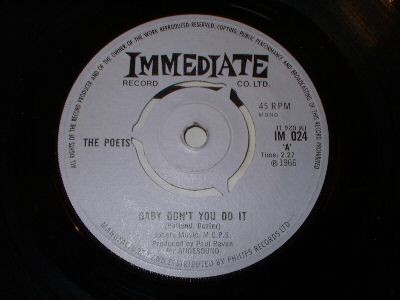 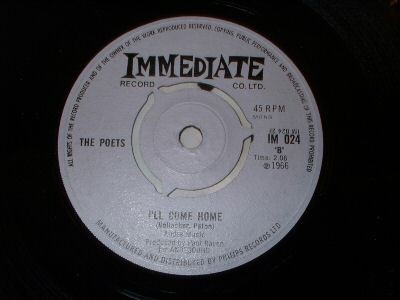 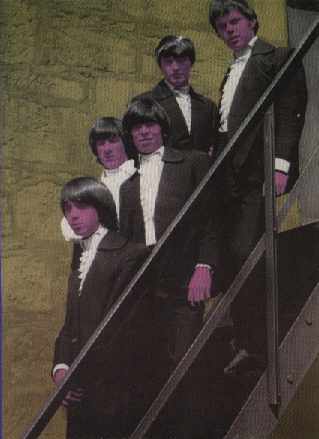 This altruistic bootleg saw the light of day mainly thanks to Lenny Helsing - a major contributor to Rockingscots..
Big thick US style cardboard sleeve and heavyweight vinyl. Great sleevenotes and lots of previously unseen (to us) pictures.
A bit darkly photocopied and what gives with the band purple fleshtones??
Still it would be curmugeonly to complain seeing as it puts together all the major label singles plus two (*) previously unreleased acetates.
The 'Baby don't you do it' track is a slightly longer and different titled version of the released single. 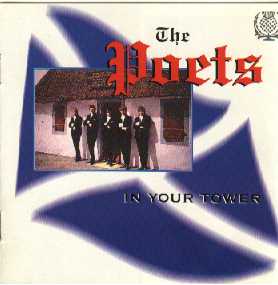 All the titles on the LP above plus the 'Baby don't you do it' A-side, The Strike Cola pairing, an early version of Blue's 'Someone' and 'Dawn'
which is the Pathfinders with the original Poets vocalist George Gallagher singing.
The gem on this CD though is "Never thought she would" which is a gorgeously slow melancholy ballad with a basic piano/drums/vocal arrangement that would have graced Blue's first album.
We reckon then, though there are no clues in the sleeve notes, that the Nicholson/MacMillan line up knocked out this little beauty of a song.
This CD was at most only semi official though it was/is widely available through specialist shops.
Excellent sleeve notes by Miss Lucy Nation, an obvious nom-de-plume,
and more previously unseen pics including one (see black and white pic far above) of a very young Macmillan (far left)
Dig those sideboards on Frazer Watson (third from left).
Front cover shows the group outside Burn's Cottage in Ayrshire where the great poet and sartorial style guru was born.
Terrific stuff  and well worth your £15. 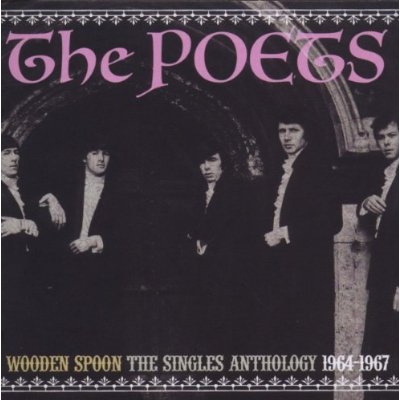 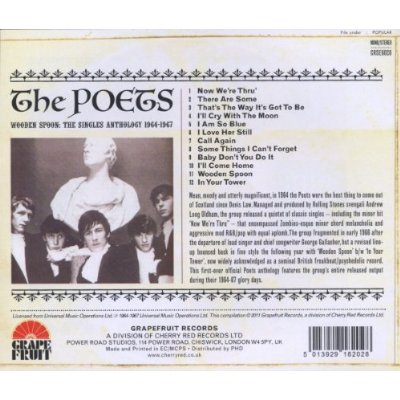 A 2011 CD collection you can pick up from Amazon etc.
Only 12 tracks but great sleeve notes by David Wells - even a namecheck for  Rockingscots.co.uk.

Poets on the Radio
We recall the Poets doing one Radio One Club show. This was a lunchtime programme from a club in different towns in the UK featuring local bands doing perhaps three numbers each time.
The Poets broadcast was, we believe, from the Electric Garden, Glasgow.  We have two photos from the event.  See above b/w pics by John Young.
We only recall them doing a version of Nicholson's 'Bad Weather, which resurfaced on Marmalade's 'Songs' album. What else did they do and did anyone tape the show? 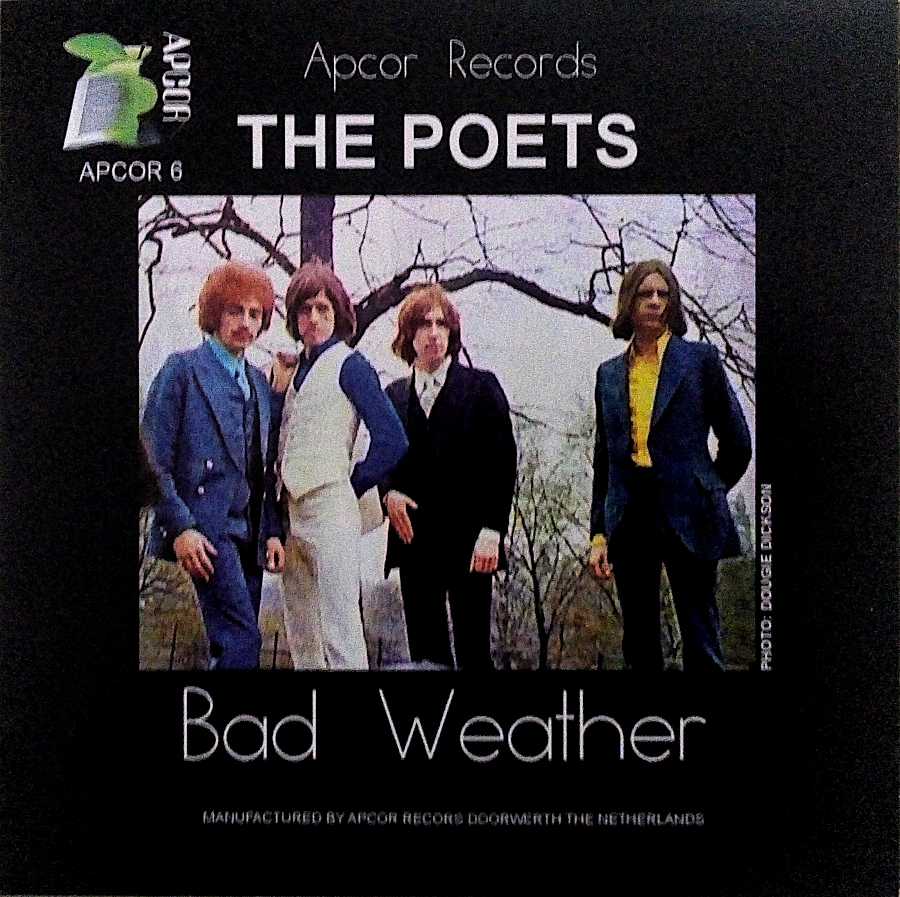 Talking of Bad Weather - This studio recording was released in 2019/2020.
by a Dutch lot. Others side is a version by Trash.
Both tracks are taken from original acetates.

Just a couple more pics of Poets singles below. 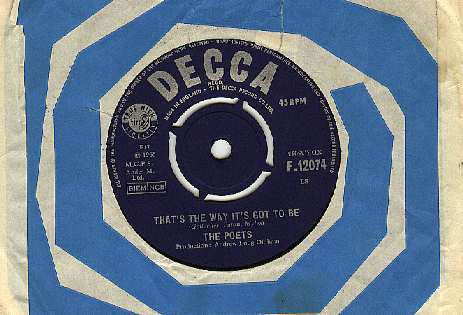 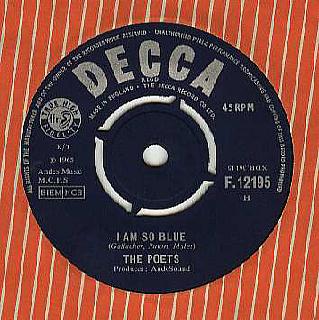 And on that timely title: go check out the Blue page.