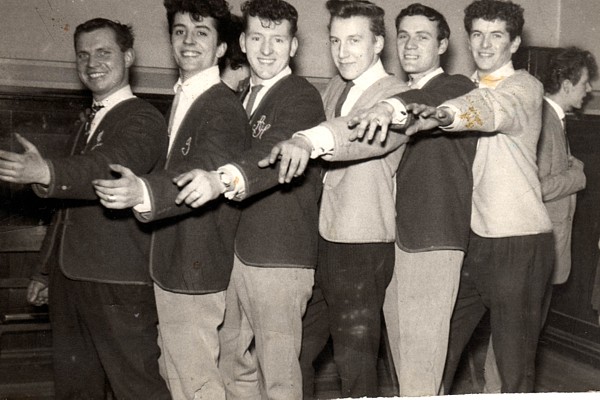 The origins of the Playboys, the shifting line-ups and band name changes
Bill recalls - I started playing with the Ralph Danks Playboys from Glasgow in 1958.  We used to pack out the Cooper Institute in Cathcart every Saturday night.   In 1961 we went to The Top Ten Club in Hamburg  in place of the Bobby Patrick Big Six who had cancelled to back Brenda Lee on her British tour. Back in Glasgow after 6 weeks in Germany Ralph left us and returned to Germany to join Rikkie Barnes in a resident house band at the Top Ten Club.  We then  reformed and changed the name to just 'The Playboys'. 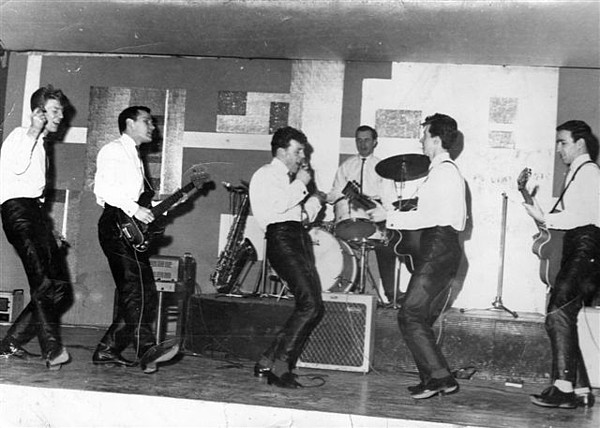 'We never did get to play in Scotland again but we had a very successful career in German between 1962 and 1966.  However, in 1963 Big John, Sandy and Les were injured an a car crash and returned home and the band had to reform again.  A series of personnel came and went - showman/singer Davy Jones, guitarist Dicky Scott, Babs Murphy a Diana Ross style singer from Glasgow and Baby Bubbles a tiny black singer from London.  But eventually, Jimmy McLachlan and Billy Simpson, both from Glasgow, came in on on guitars along with Dennis Overton on sax.  John O'Hara took over the lead vocals and centre stage and the band name changed to: 'The Playboys with John O'Hara' then 'John O'Hara and his Playboys' then 'John O'Hara and his New Playboys.' 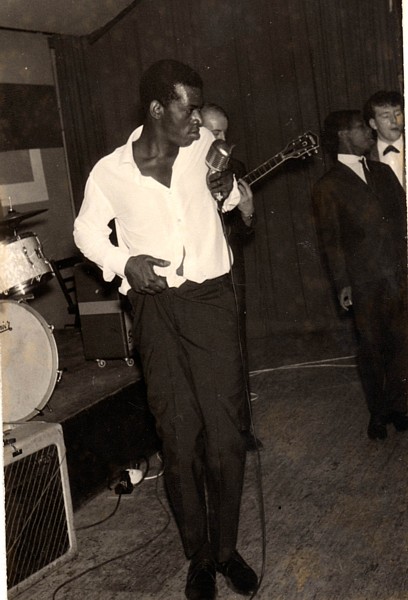 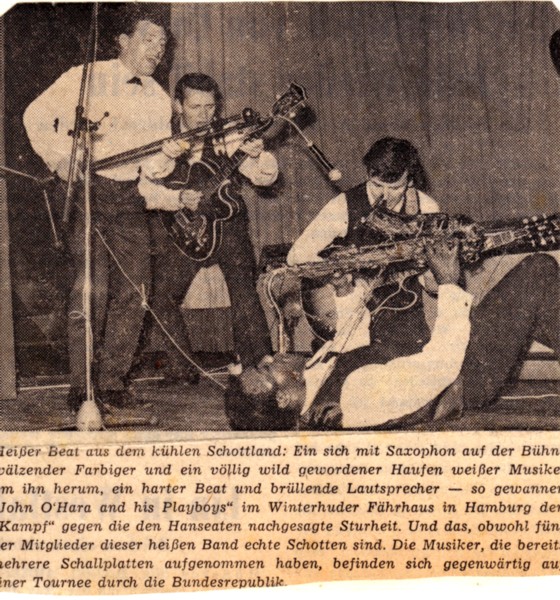 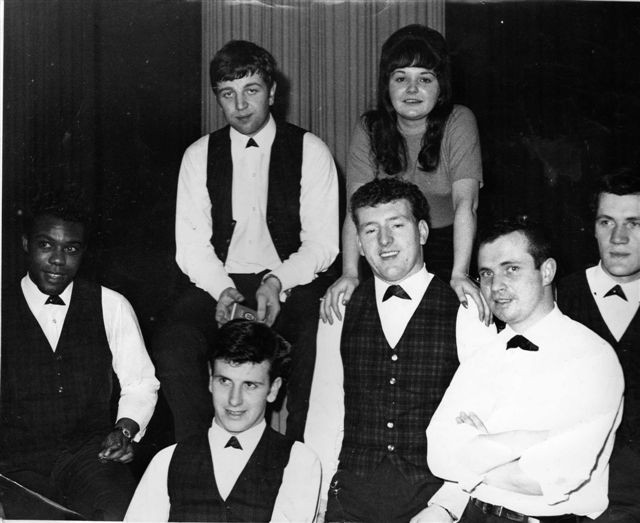 Babs Murphy with the Playboys 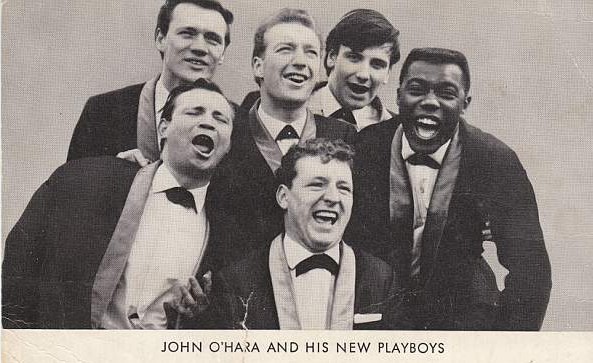 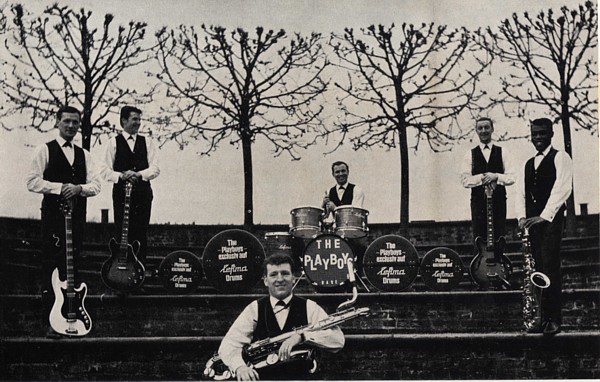 
In Dec 1964, Jimmy McLachlan left  and was replaced by Pete Campbell (a scouser) on lead guitar.  Dennis Overton had to go home for his mother's funeral so George 'Hoagy' Carmichaeljoined the band until he wanted out to play "better music" and Dennis was asked back.  Billy Simpson then left and Bobby Campbell joined us on Keyboard/guitar and vocals.  Dennis left in 1966 and the line up stayed more or less the same under the new name of 'O'Haras Playboys'.  Pete Green from London played sax until1969 when Billy Simpson again rejoined in place of Bobby Campbell who left for family reasons and John Wiggins joined for a short time. 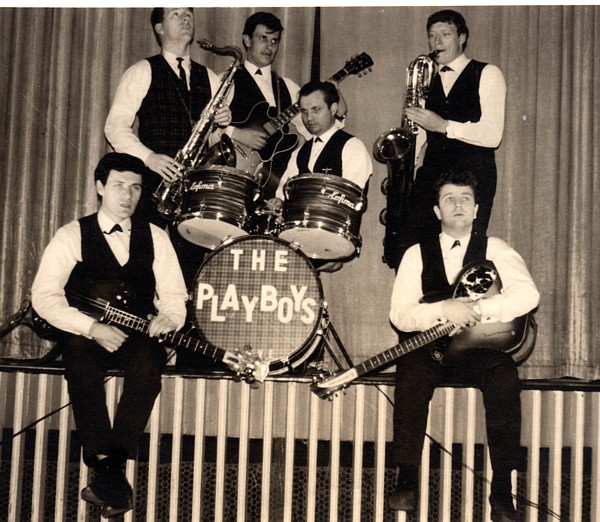 
The move to England
The band relocated to England in 1966 where they had a flat in both London and Sheffield and would stay in the one nearest to where they were playing.   There was even greater success in England playing along side The Who, Tom Jones, Englebert, Little Richard, The Platters and Joe Cocker and backed Mary Wells on a 30 English tour.  Bill remembers, 'We were also regulars in all the in clubs in London such as The Speakeasy, the Ram Jam Club, the Q Club, the Bag O Nails, the Scotch Of St James, Sybellas & Klooks Kleek.  Klooks Kleek was an exclusive  club that only took the best bands and if you played there you were IN.  When we first returned to England we did a month's residency  in the London Playboy Club and and some of the winning England team came in to celebrate.  Bobby Moore got up on stage and sang Paul Anka's Diana with us. Some of the German team were there too but went off to Soho when they found out there were no strippers in the Playboy!  We also did tours - Beirit in Dec 68/ Jan 69, St. Tropez in May 69, Freeport Bahamas in July /August  69 and a 14 day tour of Germany in Oct 69.' 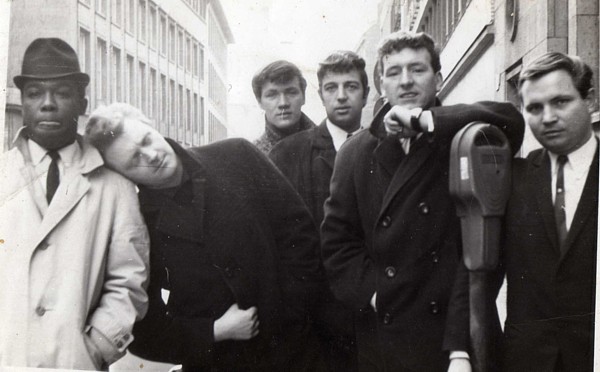 The Music
Bill Mathieson; 'When we first started in the Cooper Institute, we did mostly Top 20 songs such as Speedy Gonzales etc.  As 'The Playboys' we played anything from Pop to Rock to Soul to RnB and even songs from musicals.  It wasn't until we went to Hamburg for the first time that we heard other bands doing American stuff and we started to do the same. By the way, we arrived on a Sunday and just missed the early Beatles who had left the Star Club the night before to go back home to promote Love Me Do - though we met up with them later on. 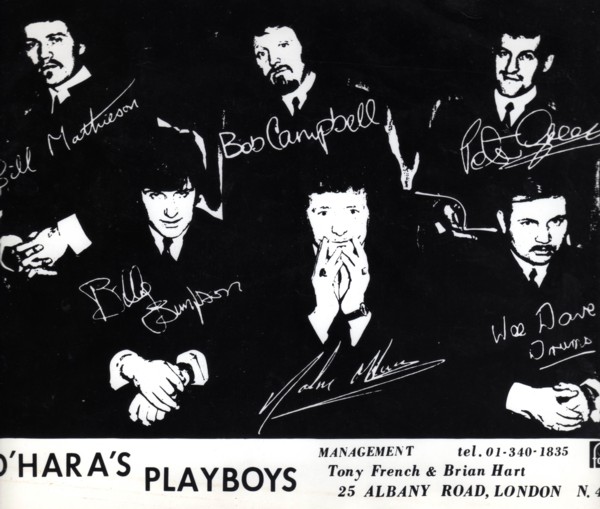 In England we were probably classed as a cover band doing songs from the charts plus Four Tops, Temptations, Stevie Wonder, Tom Jones and even Englebert, not copying but changing arrangements a lot to suit our style. Bobby Campbell, who shared vocals, and John wrote a few songs that we did on stage and with Billy Simpson who also sang we had  strong vocal harmonies. The band could change the music to suit the clubs we did, from soul for the London Q Club to a mixture for cabaret clubs, discos, universities, etc - all types of genres with lots of Motown. Strangely, one of our most requested songs  at the Q Club (a largely black club in London) was a straightforward version of Maria from West Side Story. 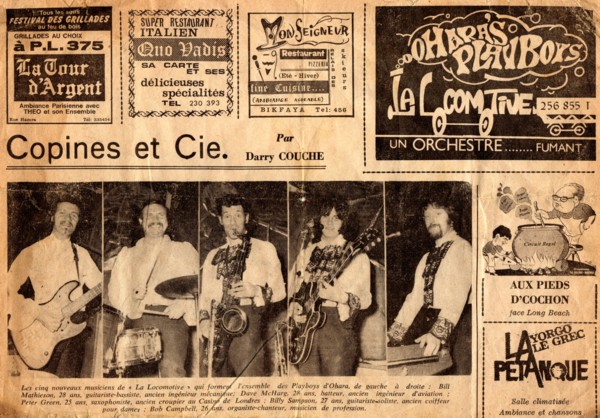 Up to late 1969, although John was the nominal leader everyone had an equal say in what we did. John,Bobby and Billy S. could chose what songs they wanted to sing but if most of the band didn't like it, it never got sung.' 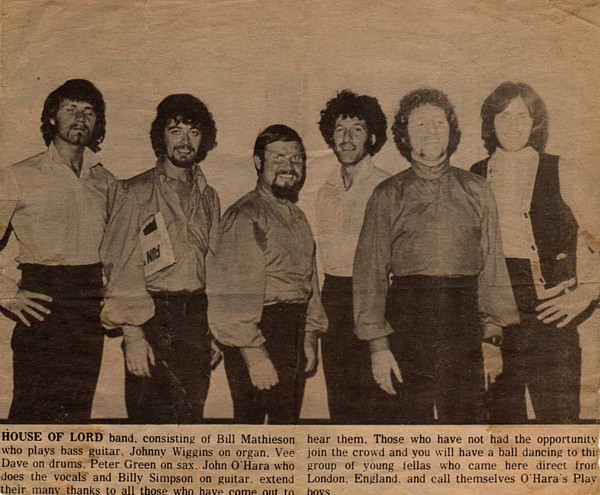 Playboys on the telly
Bill: 'We did German TV such as Nord Deutsch Fernsehen (North German TV). Then in 1968/69 we did 8 TV shows on ITV, STV, TELEFIS  EIREAN, BBC1 & BBC2 including the Golden Shot and Colour Me Pop.
For the latter we were filmed live in Sheffield for the 1st half of the programme and recorded the 2nd half in the BBC studios.
We were the first band to have the whole show to ourselves.

Watch the TV clips on You Tube:  Woolly Bully;   I'm Down;  We gotta get out of this place. 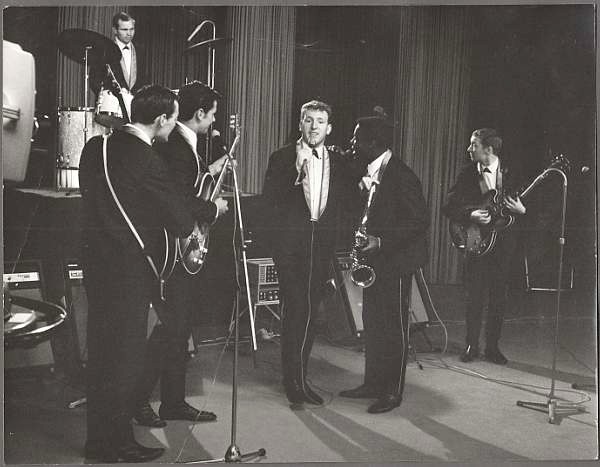 Above: From the first TV appearance on Nord Deutsch Fernsehen (Northern German TV). 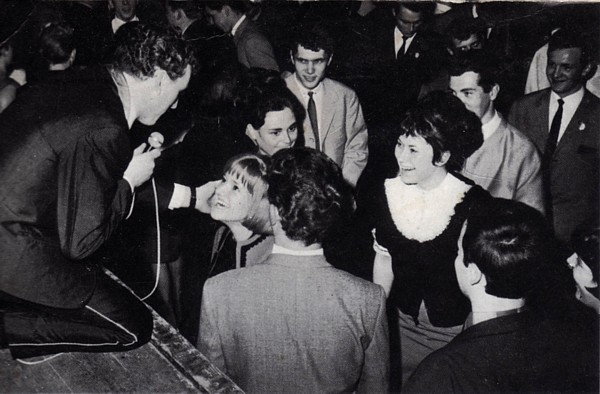 John O'Hara on stage
Bill M : 'The success of the band really started  with John taking over lead vocals and Jimmy  McLachlan and Billy Simpson joining on rhythm and lead guitar plus their added vocals was a bonus, giving us a fuller sound.  After establishing himself as lead singer John became a real showman and a great act.  He was known to climb and swing from stage curtains, roll about on his back etc.  He could really work and excite an audience as the photos below show. From rockers to ballads his vocal range was extraordinary.' 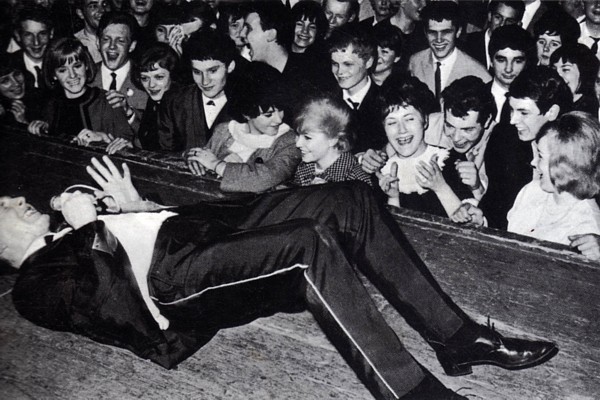 The Playboys on record
We released 11 singles and 2 LPs and were also on the radio nearly every day on the Jimmy Young, Tony Blackburn, Simon Dee, Dave Lee Travis & Emperor Roscoe shows.  Unfortunately though, we never got into the record charts. 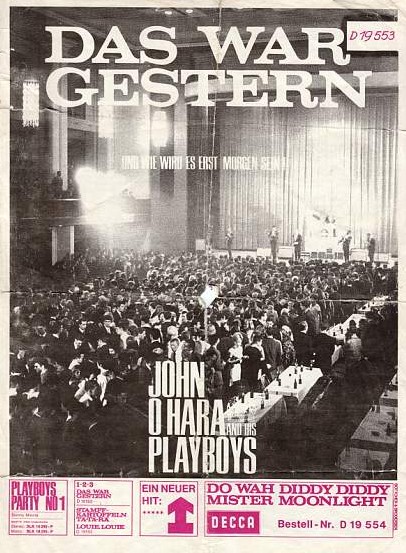 Advert for Playboys German LP & singles - with the band on stage 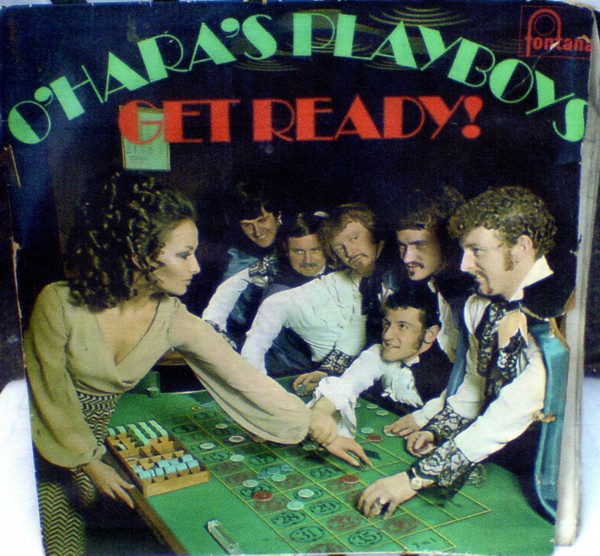 Front cover of the 2nd LP. 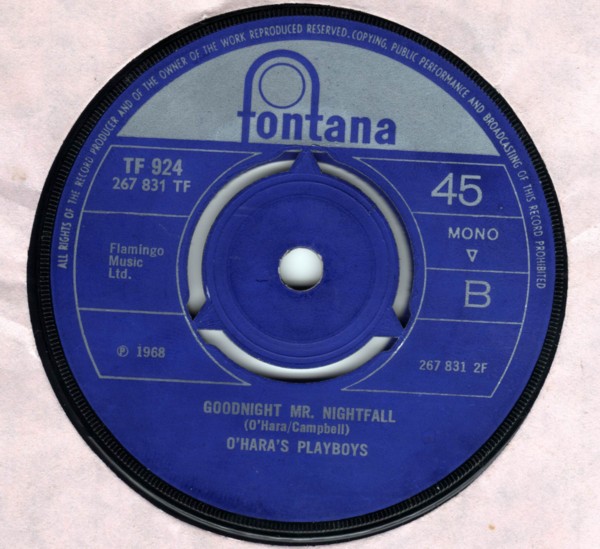 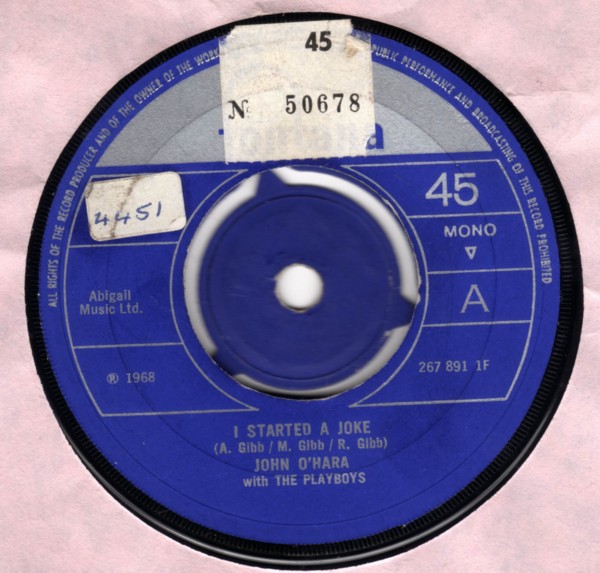 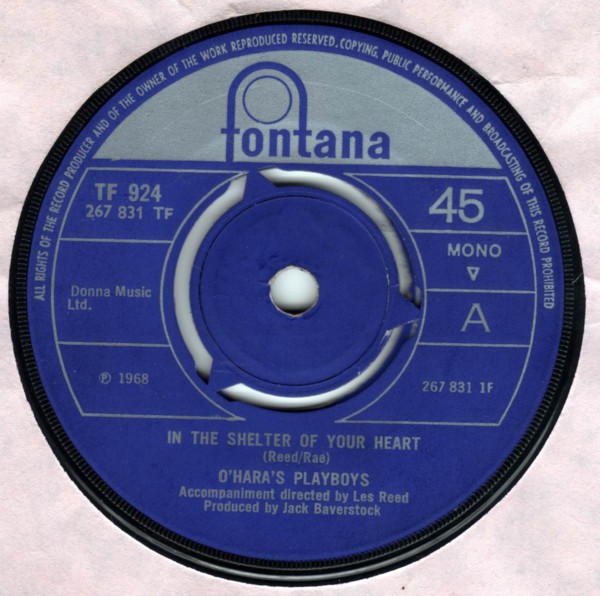 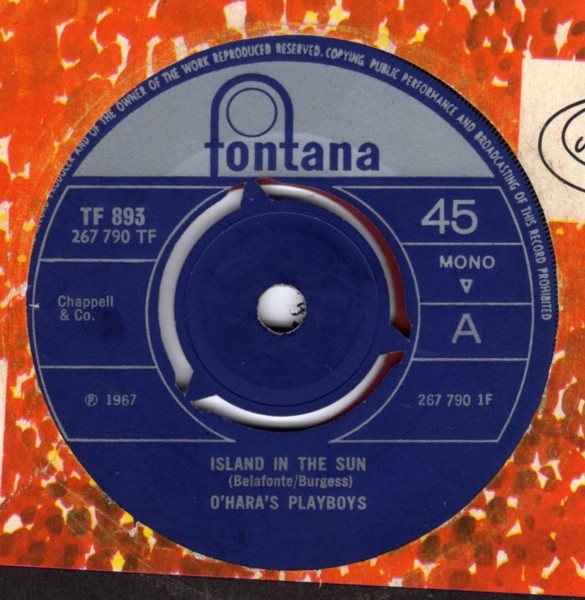 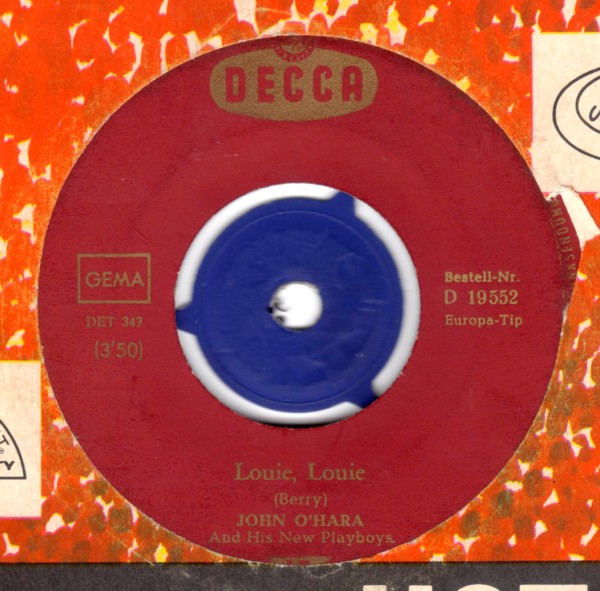 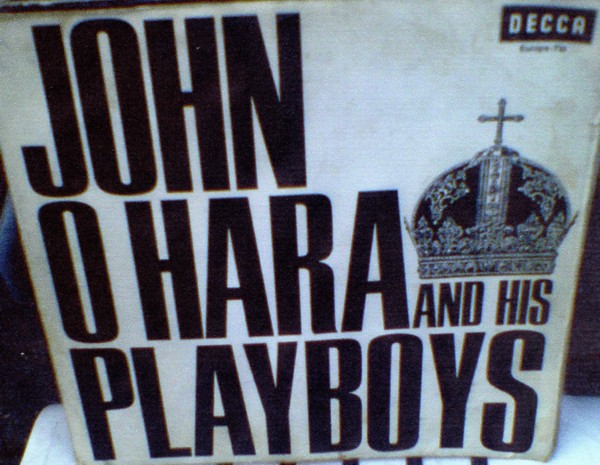 The Playboys first LP
'The album was recorded live by Decca which, as we were told at the time, was the first time German Decca had recorded a pop group live.
The album cover was a special fold out one which drew the wrath of one Catterina Valente, one of Decca's foremost artistes of the time.'

Then what happened
I left at the end of 1969 and returned to my trade as an engineer. Les Connel kept on playing and went back to Germany with Big John McCall.  Big John died in early 2011 aged 70.   Davy McHarg played in another couple of bands, one that became The Glitter Band just after he left to work in Sheffield clubs. Jimmy McLachlan went on playing till 2009.  Billy Simpson lives in the Carlisle area working as a truck driver and still plays guitar a bit I think. Sandy McFarlane passed away some years back I believe. Pete Campbell has a successfull taxi business in London.  George "Hoagy" Carmichael did his pit orchestra thing in various theatres in England.  Bobby Campbell played in a couple of Sheffield bands before going solo then retiring friom music in the mid 70s.  John Wiggins ran a club in Spain and married the female drummer of The LiverBirds. Pete Green became a successful businessmanwith shops in Sheffield and London.  John went solo after the band broke up 1970/71, working successfully in pubs and clubs until he retired 2010.
Cheers, Bill Mathieson.