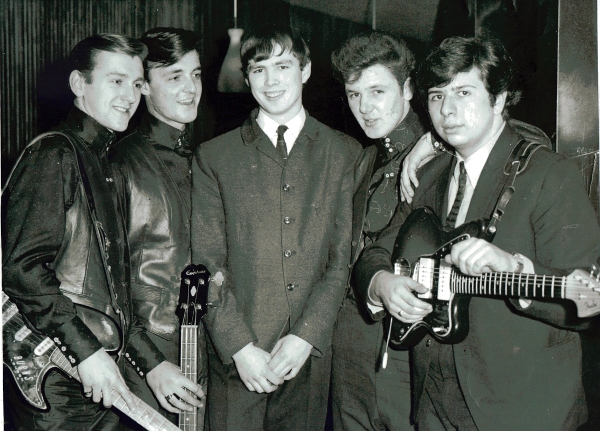 Our most lucrative work was through the John Wilson agency and we played all of the American bases in Scotland and some in England.
We played in the All Nighter when Bill Patricks Blues Council were resident plus Paisley Ice Rink, the Cove in Paisley, Picasso, Locarno and so on.
We became the resident Tuesday night band at the Flamingo when the Poets left.
To get that gig we had to have a female singer and a sax player and/or organist and Maggie Bell was duly recruited as the female singer.
The Flamingo management wanted to try a new format on the Tuesday night after the Poets left as I recall.
The photo above was taken in the Flamingo for advertising purposes.

Our original drummer Ron Milne who was later in Studio Six and was on the Stax Tour.  He was replaced by Douglas Warnock who was without doubt one of the best drummers around at that time.  Johnny Dick the singer wanted  us to play James Brown style music, which the rest of didn't due mostly to the punters not knowing who he was, caused him to move on. Les Connel was on guitar with us for a while when he came back from Hamburg.
We then went our separate ways. Colin Morrison with whom I started the group joined the Pathfinders and the others members went off to other bands.

I suppose I was instrumental in the band separating,  We used to practice in the Lindella at times so I got to know Alec Houston and Betty Allen quite well.
Because they knew I owned a reliable 12 seat mini bus, I was asked to take Lulu and the Luvvers to record a demo in London and then around promotional tours, gigs and TV shows.  I stayed with them as their transport/dogsbody until I could escape with payment for my efforts.
I met most of the top groups in and around London when I was transporting the Luvvers and also through Alex and Leslie Harvey,
This affected our group as not only was I a member but I owned the transport, PA system, arranged the bookings etc.

I lost touch with Colin Morrison when he went to live in Crail and I moved to Norwich.  We had been very close friends from an early age and it would be great to reminice with him about all the places we played .  Maybe we can reconnect through Rockingscots.