www.rockingscots.co.uk
Rockingscots is a website dedicated to Scottish beat groups and rock bands from the '60s and '70s.
Martin Griffiths:
The System, Beggars Opera & beyond
Martin Griffiths, singer on the first three (and best) Beggars Opera albums relates his time before, during & after that band.
For the latest news (Jan 2012) on what Martin is up to - see the end of the page! 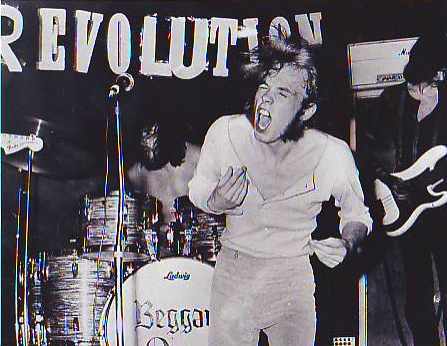 I was born in Newcastle. Dad was working for Nestles and was transferred to Glasgow, I was thirteen at the time and a bit of a loner.  It was watching the Beatstalkers in George Square then seeing The Pathfinders at the Flamingo Ballroom that did it for me. They were pure magic and I then knew what I wanted to do -- be a singer in a band !  I started with a school band called the System and that certainly got me out and about.  We were all from Eastwood Secondary School and even had a fan club!  We played mostly in south Glasgow at youth clubs, scout halls and even at bible classes. Our first City gig was in a Union Street shop window on Charities Day. 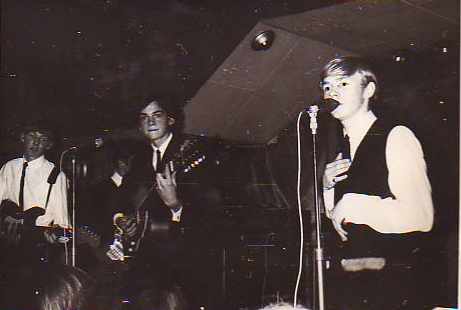 We even managed to play the Flamingo supporting the Pathfinders and took a bus load of school fans with us.   The stage looks so small but the ballroom was huge.   It did not go very well. We got blown off the stage and the manager's advice to us was to give up!   But the seed had been sown and I'd got to sing with a decent mike! 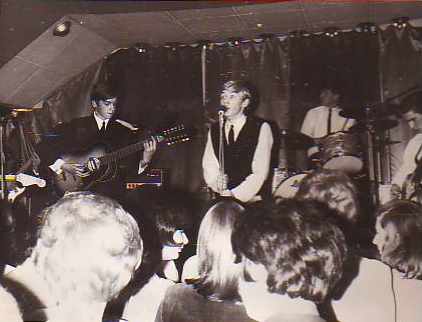 The System line-up later became: Ricky Gardiner on guitar, Marshall Erskine on bass and Graham Diamond on drums and me singing.  A big gig for us was in August 1966 under the guise of the “Milk Shake Beat Group” we played at Ingliston Motor Racing Circuit but I’m afraid we weren’t heard above Jackie Stewart roaring around the track. We did a gig at the Maryland Ballroom all dressed up in old policeman’s jackets that Marshall and I had bought in Carnaby Street --- we just melted away! 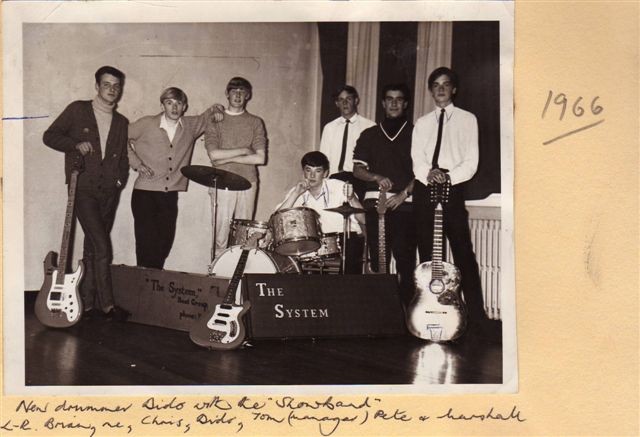 The System was over for me when in 1966 the family moved down to Datchet in Berkshire. I got a job as trainee buyer at Harrods in London in the Radio and TV dept.  Next door was the huge Piano Salon where a young and unknown Elton John used to come and try out the Grands! 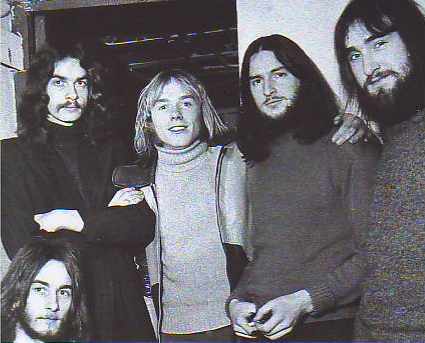 Martin with a neat wee leather 'Budgie' jacket and his ever present smile in among all those serious looks, jumpers and beards

Marshall and Ricky then came south.  The three of us decided to give it a go professionally and the idea for Beggars Opera was born.  First of all though we took jobs as as navvies building the new M20 to get cash for our equipment  We lived there too – in a caravan on the site near Beaconsfield and it was from this caravan that we drove up to Glasgow in 1969.  Marshall knew the organist Allan Park who was playing with a dance band at the Locarno so we got him in but still  needed a drummer! We auditioned and eventually found Ray Wilson who was drumming with The Beings and holding down a fitter’s job at Yarrows the ship builders.  We practiced day and night for six weeks. Ricky and Marshall had  new white Marshall 200’s (we were the first group in Scotland to have them – they got very dirty very quickly!) My vocal amp and speakers had been delayed so I had to sing against their combined power. It certainly was a good way to strengthen the vocal chords! Our roadie was James Campbell, known and feared as just JC. 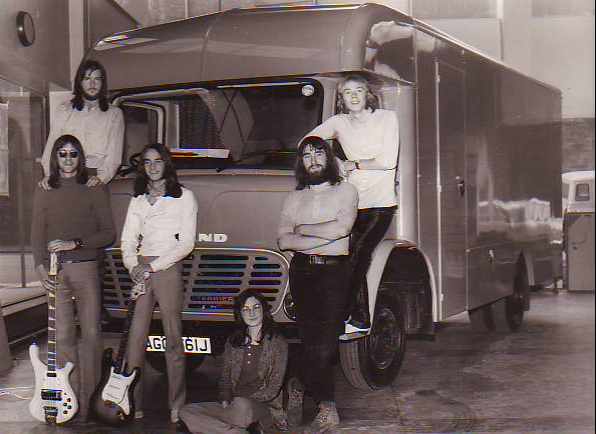 A new Beggars Opera line-up with Virginia Scott and a new van that kept breaking down.

We still didn’t have a name when we played our first gig at Burns Howff in October 1969.  John Waterson offered us a residency and I finally found the name Beggars Opera in a crossword dictionary --- little did we know then that it would fit perfectly to our future music direction. Eventually, we took over from Stone the Crows in the Howff and played there every night, twice on Saturdays and it got us tight and known.  A memorable night for me was jamming with Maggie Bell on that small stage upstairs and even now when I smell that mix of cigarette smoke, beer and disinfectant it gets my heart going and I’m back there at the Howff! 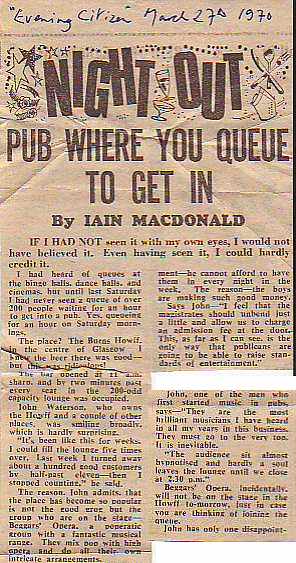 We were the first group to work for Brian Adams and his ICE agency (ICE = Inter City Entertainments) and soon started gigging all round Scotland.  Competition was tough amongst the groups and big agencies but that was only to the good and there were plenty places to play. We could do a  late gig at the Picasso around three in the morning then on to a morning session at the Watermill Hotel in Paisley! We often met other bands on the road back to Glasgow.   I remember Agatha’s Moment passing us with the usual greeting of bare arses out the window! (Rscots note - see Tear Gas pages on this custom too).

It was while playing the Watermill that Bill Martin of Eurovision Song Contest fame came to see us.  Suddenly we had a producer and were signed to the new Vertigo label for our first LP “Act One”.  Well that was how we started and it took off from there.  We seemed to always be on ferries and motoring down autobahns to festivals.   We engaged the services of a young publicist, Max Clifford, who managed to get us into all the music papers of the time and even put around the story of our incredible success in Russia - though we never visited the USSR.   We went down well in Europe, especially Germany, though. “Time Machine” from “Waters of Change” was a hit in Germany and even now still gets featured on TV and radio.

Marshall sadly left after Act One and Gordon Sellar took over on on bass.  Ricky’s girlfriend, Virginia Scott, joined us later May 1971 to enhance our classical sound with the Mellotron.   I sang on  “Waters of Change” and “Pathfinder” as well as Act One but  the constant touring took it’s toll and I left the group in 1972.  Linnie Patterson sang on the later albums.

Below: live on stage at the Greens, Glasgow complete with off-white Marshall 200 amps and what looks like knee-breeches! 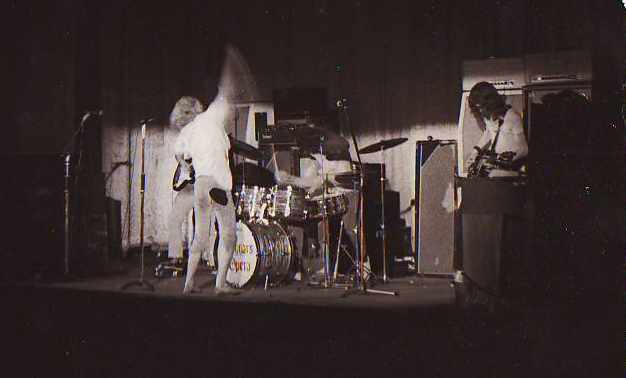 Actually its the same top & trews as the Revolution shot above.  What's that hanging out your back pocket Martin?

I couldn't stop singing though and did Manchester cabaret clubs before moving to Germany where we had been so successful. I was signed to the Jupiter record label owned by Ralph Siegel, another Eurovision Song Contest mogul.  My first single, “I’ll be coming home”, made the BBC play list.  Pete Murray said it sounded too like Tom Jones!!  I think this must have been my homesick, romantic period! 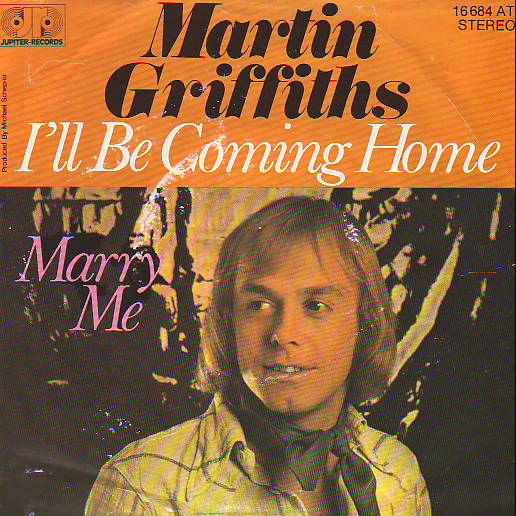 Then came disco and my second single was a disco version of  “Sitting on the Dock of the Bay” - Otis must have turned in his grave. I was "allowed" to write the B side music and words. I've just received some royalties from Austria so it hasn't been forgotten. 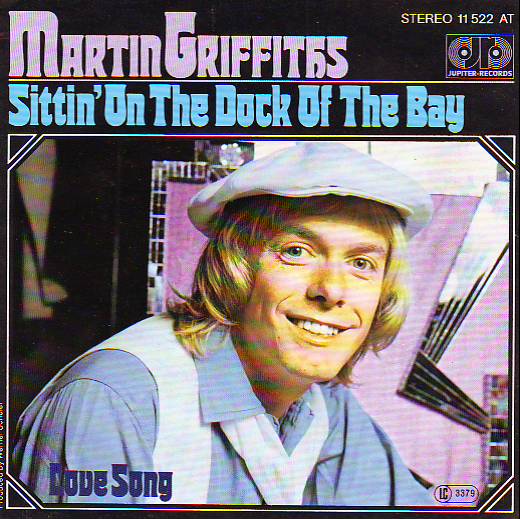 'Israelites', my third and most successful single reached number three in Germany and featured on a compilation album with Gerry Rafferty's "Baker Street," Manfred Mann's "Davy's on the road again" and Grace Jones "Do or Die" among others so I was in good company. Notice the new hair style. I remember going on an autograph tour with Kevin Keegan who was with Hamburg at the time and had a perm too. We had great conversations about the right comb to use!  I think that's when I started to lose a hair or two and the cap came in handy! 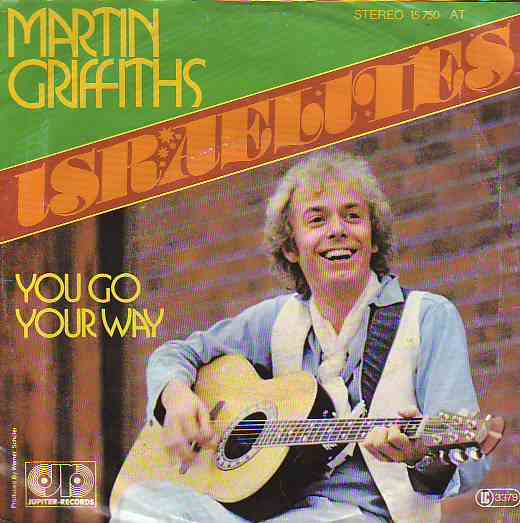 I wrote both sides of my fourth single, "Oh Ibiza" and "Friends in the mountain". It was the title music to a film about the "joys"of Ibiza together with Playboy and the legendary Ku Disco (a few stories to tell there) BUT they sent me to have my hair done and get made up for the photo -- oh dear!   This was released on the Philips label (mother to Vertigo) which pleased me no end because they had written a strongly worded letter to me after leaving Beggars Opera stating that they wanted nothing more to do with me 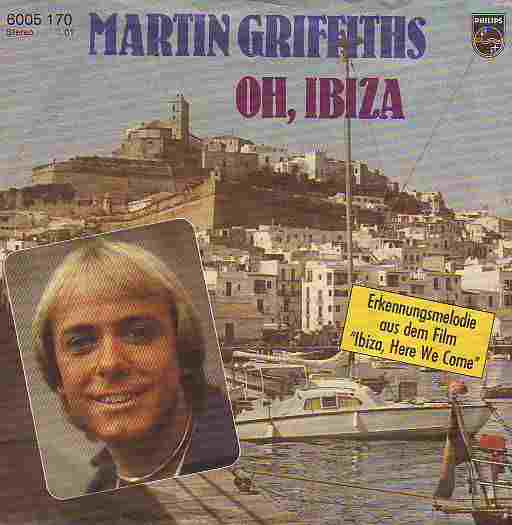 The disco days were madness and to keep my sanity I toured as support for Brian Auger, Osibisa, Ekseption, Golden Earring, Vinegar Joe, Scorpions, the French group Ange and others.  In 1980 I tried to get the band together again but Ray was missing, Ricky was with David Bowie, Marshall was in Amsterdam with Jango Edwards, Gordon was with Denny Laine and Allan was with Cliff Richard so there was little chance of success.

Martin is still living singing in Germany.  The pic above is him with the Jazz Orchester Bruchsal (JOB) Big Band around 2007 –  looking very smart though the trousers could do with a sharper crease.  He has also guested with his son Philip's band ' Alias Eye' and sang on the track “The Readiness is all” from their CD 'Field of Names'.  With the first three Beggars Opera albums out on CD again - in the new mini sleeve format he gets mail from Japan, South America and Canada and says it feels good to know that the “pub” band from Glasgow who started back in 1969 are still being listened to. 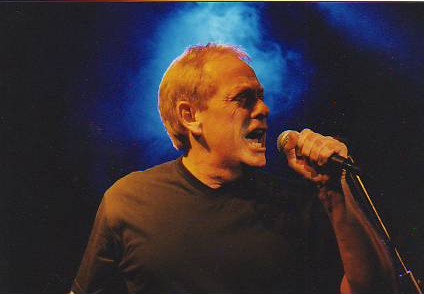 Martin's 2012 update
Here’s wishing all readers of Rockingscots a great 2012.


I’m still singing and March 2012 sees the release of a new CD from my son’s band Alias Eye called “In Between” and on this I’m singing with him a new version of the old Beggars Opera favourite “Time Machine”.  I’ve also written a classic rock musical about Scotland's own Elizabeth Stuart and Frederick of Palatine both just 16 and in love living here (Germany) in Heidelberg Castle from 1613-1619 before the disastrous 30 years War. Next year is their 400th wedding anniversary so perfect for the show!

We wish Martin and family every success with their musical ventures.

I'll be 60 this year and it's 40 years ago that we started practicing in Ricky's front room in Giffnock near Glasgow. I'm singing swing now with my son Philips band "Fake Five" and we've got a residency at Gehrings Club in Mannheim Germany. It's one of the last live clubs around and you can even get a well poured pint of Guiness there! I get asked why swing and my answer is Frank Sinatra - see newspaper cutting below from 1970.  I've always admired his phrasing and ability to hold a note. I know it's a long way to come for some swing and a pint of Guiness but if anyone reading is ever in Mannheim Germany ...... 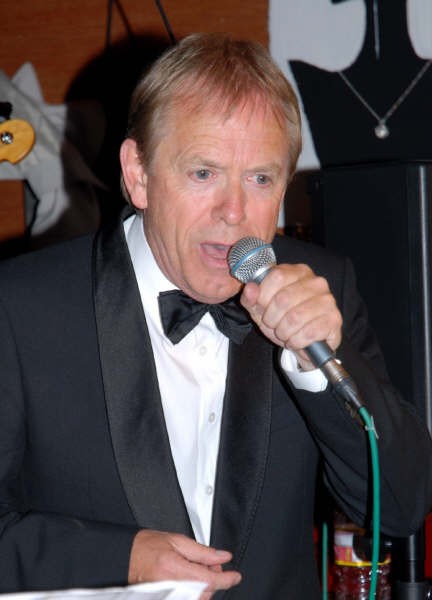 and is there not a passing visual resemblance to old blue eyes too? 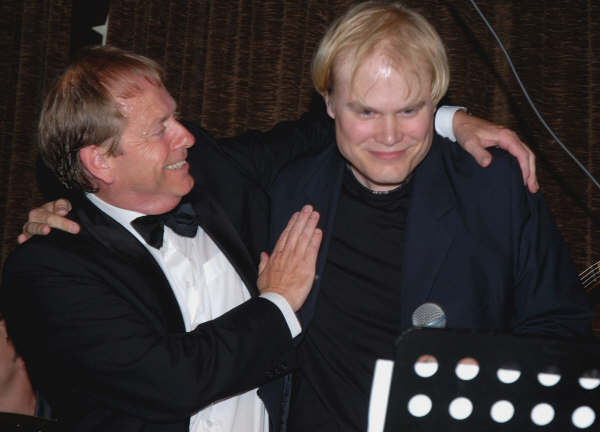 Thanks to Willi Kuper for the two photos above. 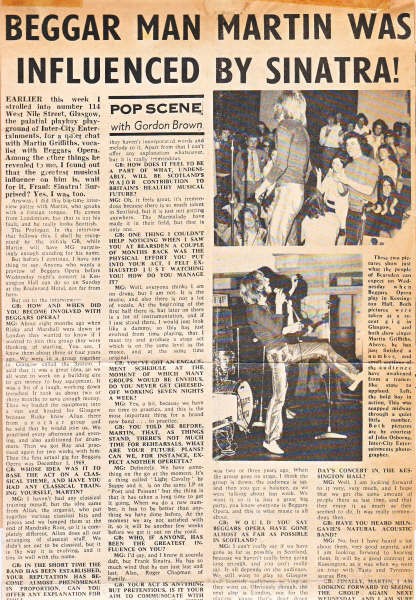 Martin declares for Sinatra back on the 5th June 1970

Thanks to Martin Griffiths for his words and the great pics from his personal collection. Rockingscots did see Beggars Opera twice.  First at the Pavilion in Ayr in 1970 when the Sarabande single had been released.  Then in 1971 at the Bobby Jones in Ayr after Virginia Scott had joined.  Martin's diary records playing Ayr twice in 1971 - Friday Jan 22nd & Fri 22 Oct. As usual we can't recall which of those we saw... or much about it!

To check out the artwork and read reviews of the first three Beggars Opera albums have a look at Greg Northrup's site at :  http://www.progweed.net/reviews/beggarsopera/beggarsopera-band.html

For the latest on Ricky Gardiner & Virginia Scott, see: http://freespace.virgin.net/ricky.gardiner/index1.htm