Rockingscots is a website dedicated to Scottish beat groups and rockbands from the '60s and '70s.
Visit the Rockingscots homepage for more groups or to e-mail us.

Tommy & The Apaches
MACBEAT WINNERS 1964
All info from Tommy Burke. 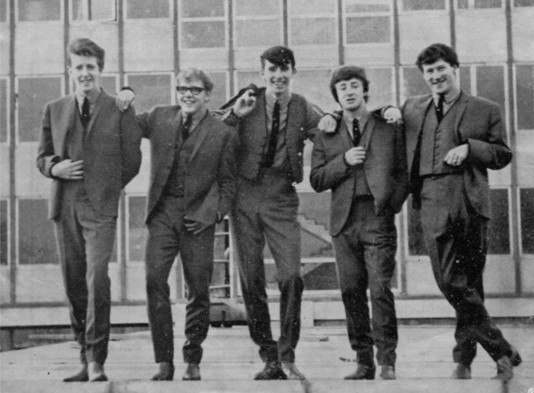 The Band was formed in 1959 by lead guitarist Jim Mullen and was based in Balloch. 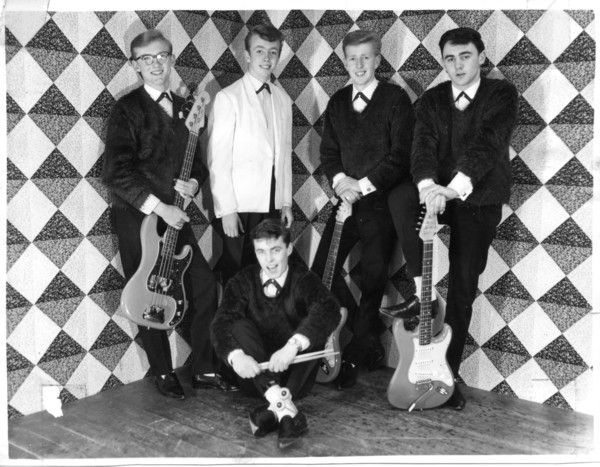 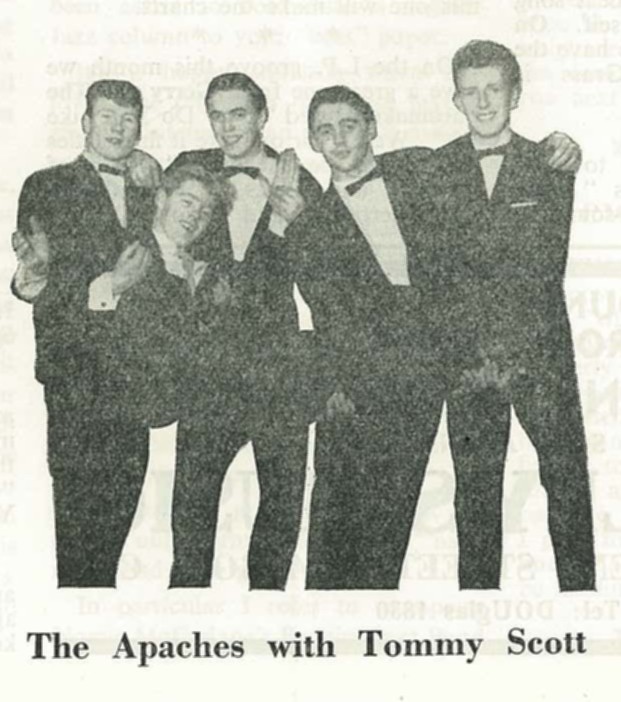 Tommy Scott replaced Steve Hall on vocals
plus it looks like Tom Patterson had handed over the bass to the somewhat similarly named Phil Pattinson.

The Band became the big thing in Dunbartonshire then performed all over Scotland
from Strathpeffer to Port Patrick and everywhere in between .

In 1962 the lead singer Tommy Scott left to go solo  - possibly to the Barrowland with Billy MacGregors beat group. 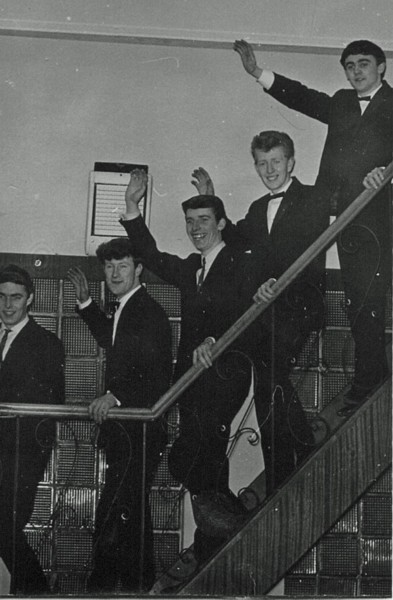 When auditions for the vacant vocal slot were held at St.Michaels hall in Dalreoch, Dumbarton, 500 tickets were issued to fans to watch the 20 odd hopeful singers. Eventually, Tommy Burke from Clydebank band the Dominators saw off the competition.
And with his arrival the band name was now augmented to 'Tommy' & the Apaches 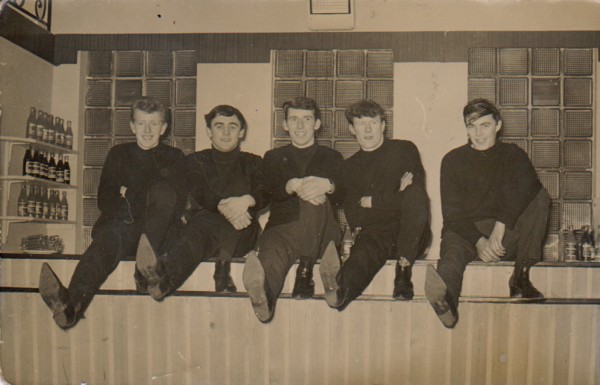 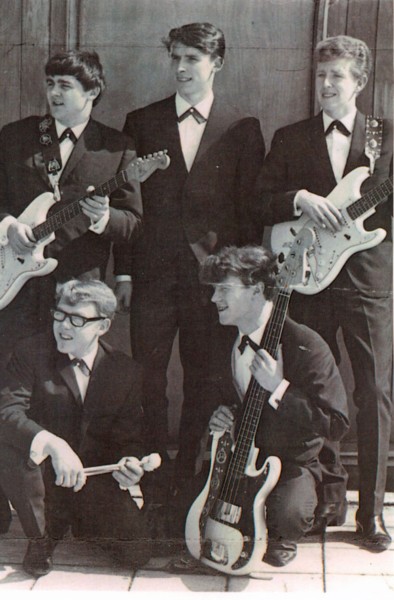 Tommy & the Apaches, 1963: Back: Jim Mullen, Tommy Burke & Charlie Daley.  Front: Jim (Bogie) Malloy & Phil Pattinson
Drummer Johnny Cannon had left having got fed up with the travelling and was replaced by Jim (Bogie) Malloy from Alexandria
The one in West Dunbartonshire not Egypt.

In 1964 Jim Mullen left to be replaced on lead guitar by Malcolm Seargent from Clydebank.  The group continued to perform all over Scotland headlining in their own right or supporting the likes of the Hollies, Merseybeats, Peter and Gordon, Kinks, P.J.Proby and Eden Kane to name just a few. The Lennoxbank Hotel in Balloch was one of the great venues of its time and the Apaches called it home. 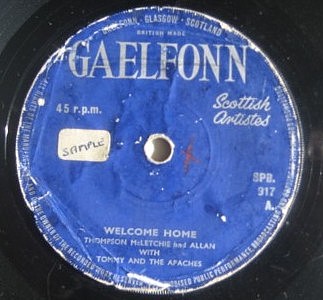 A recording was made of  "Welcome Home" a soft middle paced beat number for the Gaelfonn label, and here is a pic of the A-side label.  Tommy reckons it was nothing outstanding.  The B side was a instrumental, called 'Warhorse" - the name of the the train that ran from Glasgow to Balloch and went right by the band practice hall.  'Warhorse' was apparently very like the Shadow tunes of the day e.g. 'Wonderland'.

1964 was a great year for the Apaches.  They appeared on the STV show "One Night Stand"compared by Pete Murray.  They performed two numbers live - "Stand By Me" and Buddy Holly’s "Listen To Me".  Getting on TV back then was a big deal. 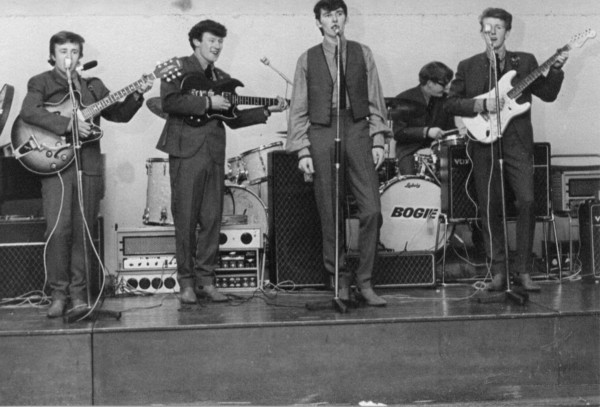 The Daily Records MacBeat contest became the groups biggest achievement.  250 Bands from all over Scotland competed for the grand prize. After various local heats and winning the Dunbartonshire area final in the old concert halls in Partick, the Band went on to win the contest at the Kelvin hall, Glasgow on the 18th September 1964 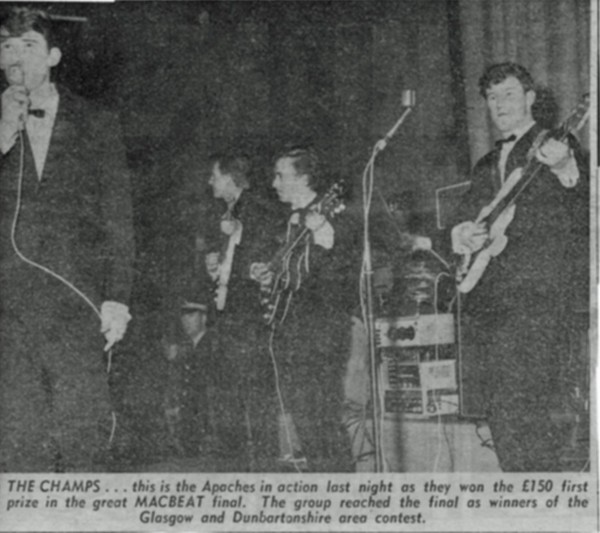 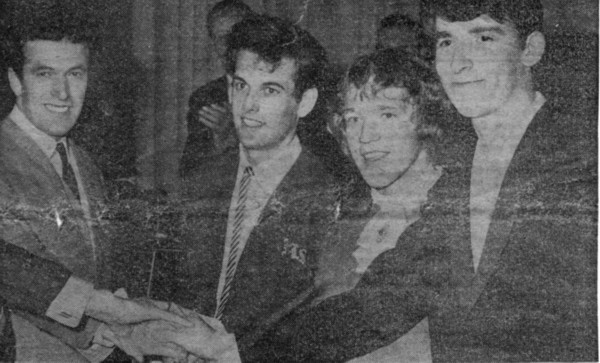 The leaders of the Red Hawks, the MI5, the Black Diamonds & the Apaches shake hands. 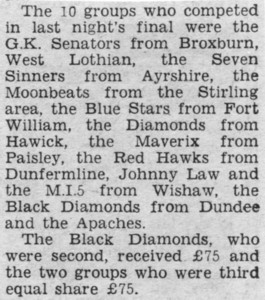 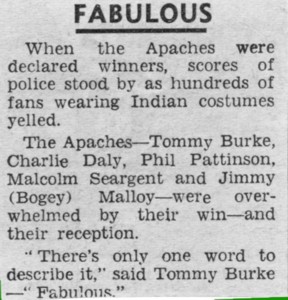 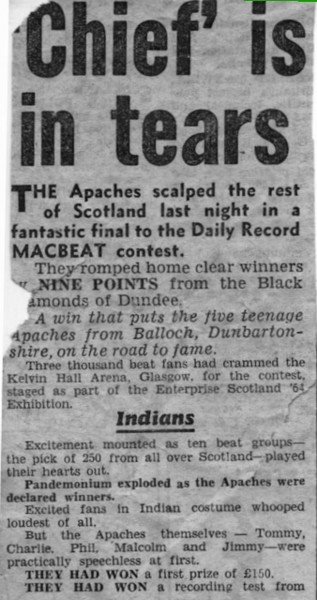 As part of the prize, a trip to London and EMI studios followed to make a record demo with George Martin.  The Apaches played pure pop covers of the time and several years before Jimi Hendrix hit the UK the guitarists were playing their instruments behind their heads -  while performing Shadows tunes. 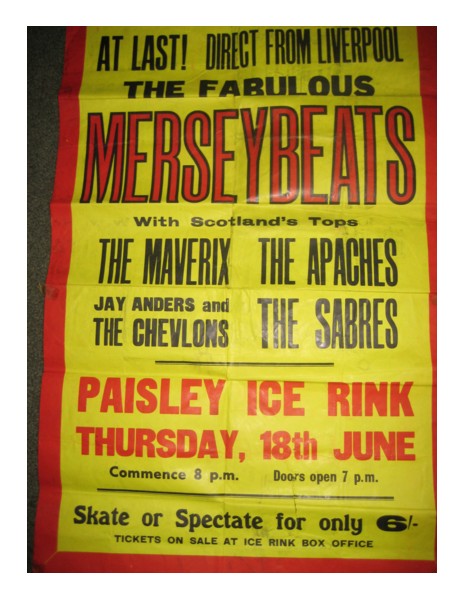 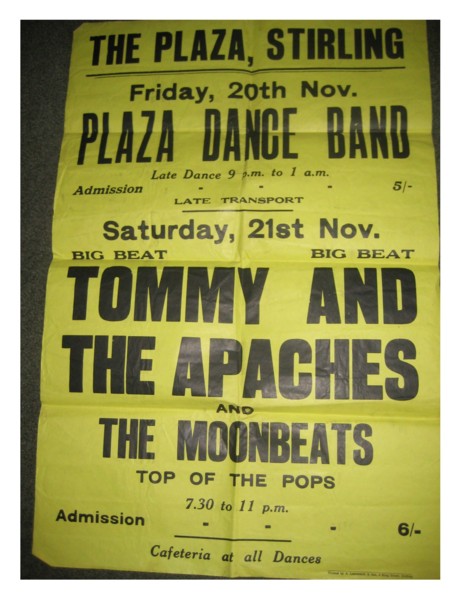 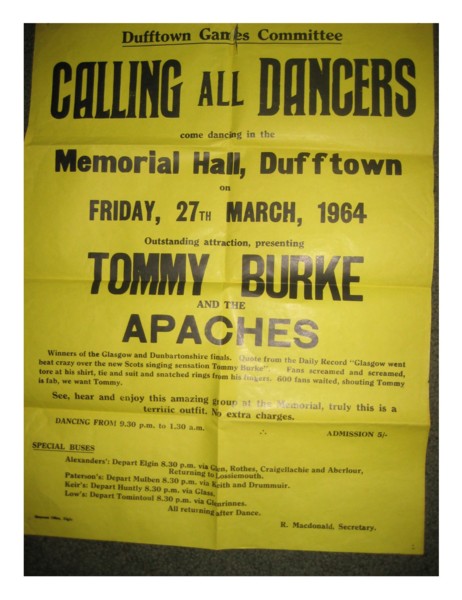 Tommy Burke left  the group in late 1965 and the Apaches finally disbanded in 1966.  Original member Charlie Daley still lives in Balloch.  Tommy Burke moved to the US.
Phil Pattinson sadly passed away in the 80s.

Jim Mullen went on to play with Henri Morrisons Swingstars who played a lot at the Cragburn in Gourock.    He married
the band's singer who used the stage name 'Iris Mac'.  They emigrated to New Zealand in 1971.
He still plays guitar and has a teaching business  in N.Z.

Jim 'Bogey' Malloy also emigrated to  N.Z. in the early '70s and eventually met up with Jim Mullen in 1977 and they played together in various bands thereafter.  Bogie was a member of the Wellington Jazz Club.  He sadly  passed away in 2004.

Johnny Cannon the original drummer was last heard of in Australia in the late 90s where he was the owner of a engineering firm.

Steve Hall, the original singer, went off to the University of St Andrews where he formed Steve Hall and the Roosters.
The band contributed two tracks to the 1965 ‘St. Andrews University Charities Campaign’ EP. (PR 5462).
'Just a Game'  and 'Why did you treat me this Way'.
After university Steve settled in Hertfordshire and worked for British Aerospace as an engineer and project manager.
He and his wife Margo enjoyed family life, having two children and two grandchildren.
They celebrated their Golden Wedding anniversary in 2017.
Music was in his blood and he never let that love of music wane; continuing to entertain his friends and family with his guitar playing and fantastic voice throughout his life.
He passed away on 22nd February 2018.’

No news on Tom Patterson

Malky Seargeant, went on to have a pretty successful career in the music business. He joined Glasgow's Studio Six at the end of the '60s when they were based in London and moved to Portugal with them.  See this link: http://www.radiolondon.co.uk/otherwaves/radscot/studiosix
Under the name Mike Sergeant the ex-Apache released solo material (see above), played pop and progressive rock with Portugal's best musicians, represented that country in the 1978 Eurovision as part of Gemini.  See this you tube clip: http://uk.youtube.com/watch?v=QTZyIPK2eZU  Mike also conducted the Portuguese entries in '83 & '98.  His daughter Julie Sergeant is a well known actress in Portugal. Check out Mike and Julie's Wikipedia entries but the translations are a bit tortuous.