Ian McNair
Before and Beyond the Dusty Hutt 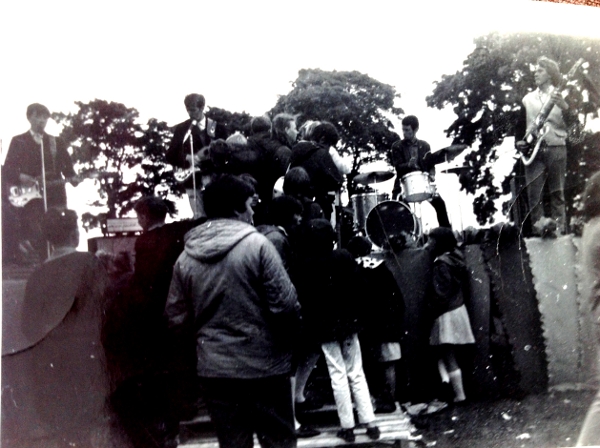 Ian was active on the Ayrshire music scene from the mid '60s playing with a number of bands before moving south in the mid '70s.
He gives his recollections of those groups here.

First band was the Sonics. The pic above was taken at Mauchline carnival 1967.  The lineup in the pic is
Left to right - Ian McNair rhythm guitar / vocals, Alistair Reid lead guitar / vocals,  James (Cookie) Inness bass guitar, Jim Newlands drums
Jimmy Hastings was our electric accordion player but he was busy taking the photo.
Ian Lambert was our regular drummer, but he was away in England at the time. Cookie made that bass himself.
We played local functions and dances,doing pop songs,Shadows instrumentals and traditional Scottish stuff with Jimmy on the accordion.


Next up was Regus Negative - no photos unfortunately. From Cumnock/New Cumnock/Mauchline. Dates: 1968-1970.
Tommy McGinn-vocals, Ian McNair - guitar, Drew McCartney drums, Billy (Neddy) Williamson (sadly another who is no longer with us) - organ,
Alistair Milroy-bass.  Francie Mone - may also have played bass briefly. Musical Style: Pop/Rock covers.
Our manager, Jim (Scomper) Park used to run New Cumnock community centre and booked the bands that played there. Hence we supported Dream Police,The Poets etc.
He booked the Bay City Rollers so we got to go to Edinburgh in return courtesy of Tam Paton.

When Tommy McGuin left the Ragus to join The Merry Macs we employed Alex (Cooky) Cook from the Glasgow band, The Willow Pattern.
They were a really popular band and played Cumnock loads of times yet there is no record of them on the net except a mention of Cooky doing 'Please Stay' at the Flamingo in Glasgow!

The highlight for me with Regus Negative (and maybe in my career overall) was when we supported the Foundations on Christmas Eve 1968. This was at Preston Town Hall.
They were at number one with 'Build Me Up Buttercup' and they turned up in a Lincon Continental limo. Their roadies were better dressed than us!
Then, we travelled back to play Ayr ice rink on Christmas Day - to play there was our ambition up until then as we used to go there mid-week to watch the Hi Fi Combo.

When the Regus split up I joined 'The Level Section' and the line up for that band therefore became: Daw - sax; John 'Bead' Brodie - trumpet; Sam Findlay - drums;
Puggy Alan - bass; Jimmy McBride from Mauchline - vocals;  and me on guitar.  Jim Park took them under his wing plus our i.e. Ragus's van and PA.
John/ Bead did a good vocal on Fleetwood Mac's 'Oh Well'. He used to turn the middle control on my Marshall up in the middle of the solo for  Marmalade's 'Reflections'.
A great character, always friendly and we has lots of laughs. 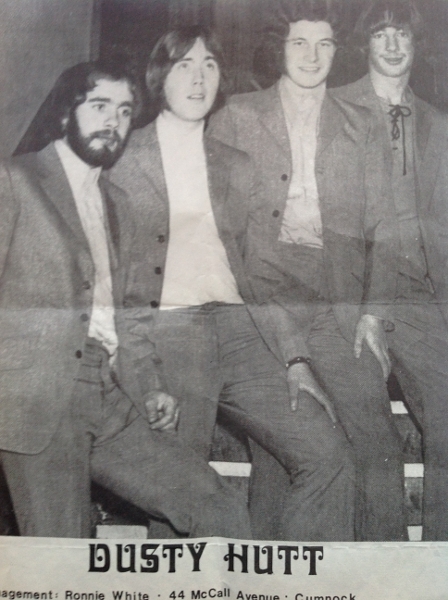 Then I joined the Dusty Hutt.
They were originally put together in 1969 to fill a residency job at the Bobby Jones on a Friday and Troon Concert Hall on the Saturday nights for the Pleasureama organisation.
Original members were: Billy Logan - keyboards, Ronnie White - guitar, Norman Lawrence - vocals/harmonica, Pat Ferry - bass, Iain Lambert - drums.
From Mauchline, Cumnock & Dalmellington.   I replaced Pat Ferry when he left.
By then, the band had been doing the residency gigs for several months and that carried on for a few more before we started doing gigs for the big Glasgow agency MAC (Music and Cabaret).
They got us gigs all over Scotland supporting the top names they had on their books.
We played mostly the latest chart stuff and like most groups of the day we tried the heavier sound as well.

Members came and went.  Tommy McGinn replaced Norman Laurence then I took over the vocals as well as bass.
Drew McCartney replaced Ian Lambert. After I left the band carried on for a year with Gordon  from Kilmarnock's  Henry Crow on vocals and Ian Alan  from Ayr on bass.

Manager - Jim Reddy from Catrine.  Roadies - Robert 'Miff' Smith & George.
Miff pointed me in the right direction for songs to play with the band.
Among his greatest suggestions were 'Private Number', 'Good Times' by the Easybeats and 'Ride My See-Saw' by the Moody Blues. 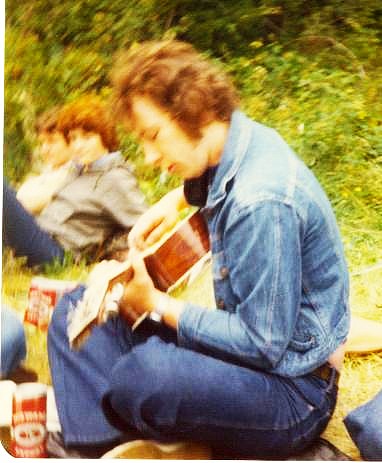 Our Miff is a renowned party singer/guitarist and Rockingscots web site contributor. See pic above - taken in Arran - probably summer 1975
Who is that in the background?  Why it's John Brodie once of  'Level Section' with girlfriend Maggie!

Back to Ian:   I joined the Breeez (no pics) when John Hawkey left to play with the Corsairs.
We played the Red Lion in Prestwick, the Loans Inn near Troon and the Tup in Cumnock.
Jock Whiteside was a Beatles and Rorry Galagher fan so we did a lot of their songs.
We also did  takes of the Humble Pie numbers off the "Smoking" album and old Small Faces songs.
Our party piece was Bowie's Hang on to Yourself.   We were also with the MAC agency in Glasgow. 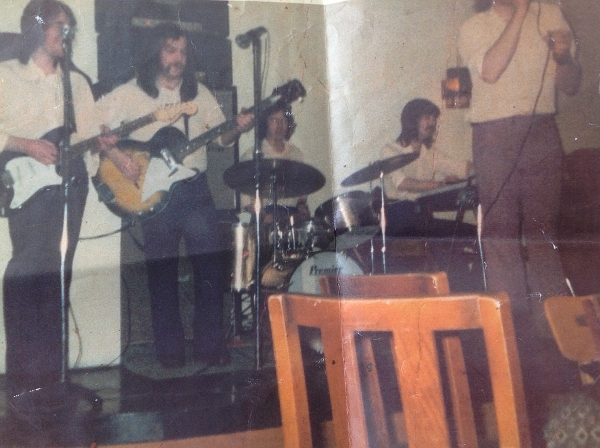 Moving on again, I was in the 'Precinct Showband', 1973-1974. See pic above.
L-R, Ian McNair -guitar; John Whiteside - bass; Colin Sinclair - drums; Jimmy Hastings - Farfisa organ and John Penman - vocals.
From Mauchline,Tarbolton,Monkton and Drongan.
We played social clubs, functions and dances around Ayrshire & Glasgow and as far as Workington in Cumbria.
We played pop music and traditional stuff for weddings. 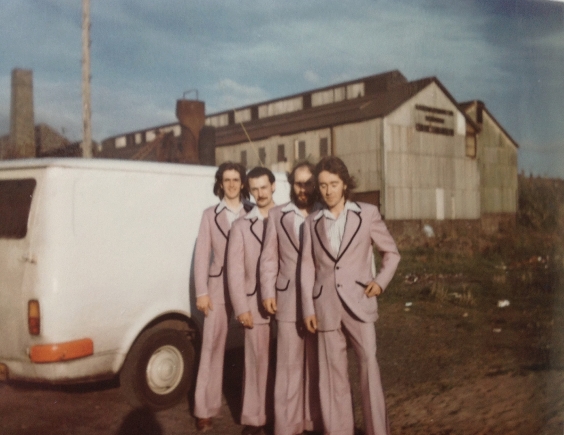 This band was Contrast. Left to Right: Davy Murray drums; Albert sax/ clarinet; Ronny White guitar;  Ian McNair bass.
From Muirkirk,Kilmarnock,Cumnock and Mauchline.
Photo taken at the back of Hurlford club 1974 by our roadie Ian Willson.
We played social clubs and local dances.We did the Ibrox club regularly.
They had close circuit TV there and you could see yourself on TV like Top of the Pops. 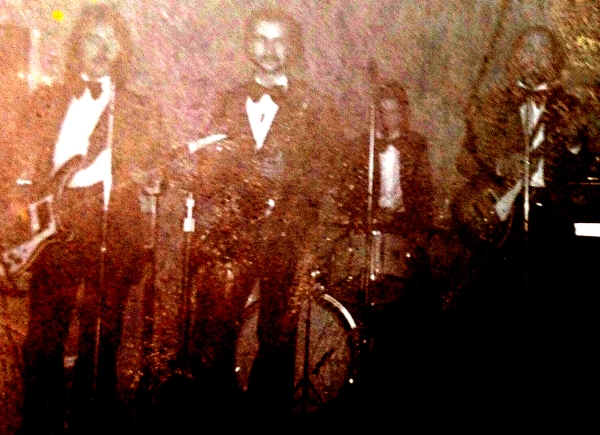 We had the pleasure of having Ricky Barnes in the band  Contrast at one time. What a sax player he was!
In the early 60s he was a big name  in Glasgow with 'Ricky Barnes All Stars'.
He had just returned from Germany where he had .been the manager at the Star club in Hamburg.
You just had to mention any star of the day and he had known, and could tell good stories about, them in Hamburg including John Lennon, Garry Glitter and Richie Blackmore. 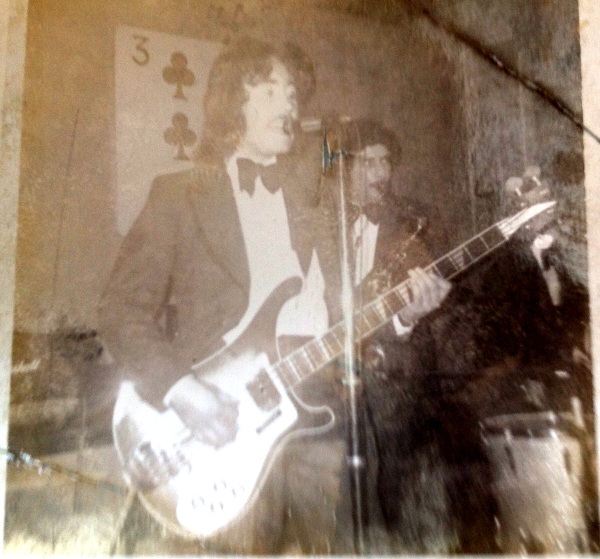 Contrast had many line-up changes over the years  - and they are discussed further at:
Kerr Strickland  - Ayrshire drummer.

Now, back to Ian McNair once more 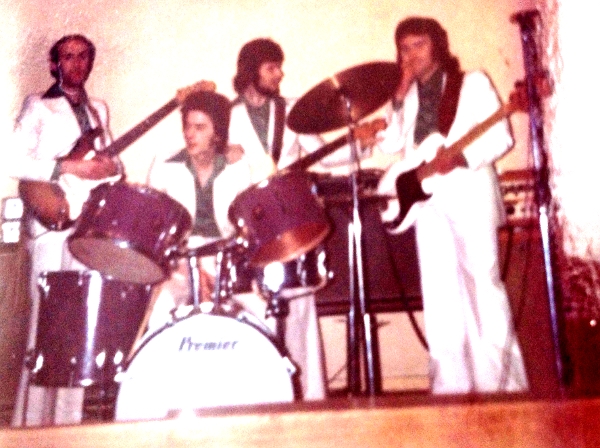 Between 1972-73 I played I played with the great Tommy Truesdale for a year and a bit.
Here is a recording of Ian singing Stand By Me with the Sundowners at the Towans Hotel, Prestwick- while Tommy was on a break
https://www.youtube.com/watch?v=NwoHvnnzdqc

We made a record at Harry Mangolis' Glasgow recording studio.We did a about 8 songs but they messed up the mixing.
An EPs worth was all that was left: Running Bear, Albatross, Sweet Little Rock and Roller and Red Red Wine.
On the takes were: Tommy;  Willy Smith from Whitletts on sax; Colin Sinclair - drums; Jimmy Hastings - organ; Eric -guitar; me on bass plus Jimmy Coskar- piano.
Jimmy was the resident pianist at the Darlington Hotel in Ayr. He also worked at Scottish Aviation Ltd (SAL) at Prestwick where I was employed as well.
What a player he was and I could see why Tommy wanted his input on the session.
We were told to take a packed lunch as it would be a long day - one of the guy's packed lunch consisted of 6 cans of McEwans Export.
My ambition was to play on a record and the Red Red Wine track turned out really great. I've still got the recording on tape.
The EPs were sold at the Record and Card Centre in Ayr. 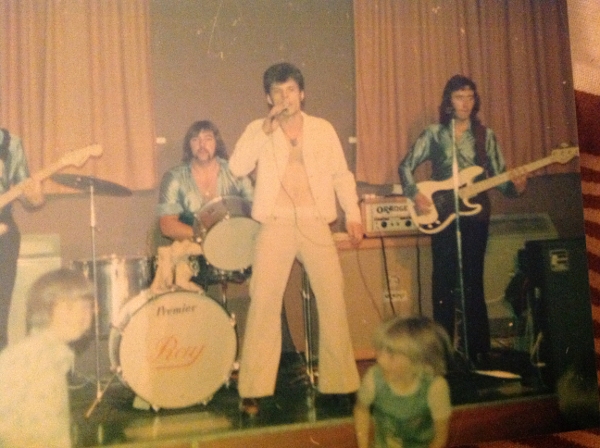 I moved to Kingston outside London in early 1976 to work in the aircraft industry there.
I joined a local band called 'Planet' and played with them for years - Garry and Bob - guitars, Ray - drums, Dennis - vocals and me on bass. 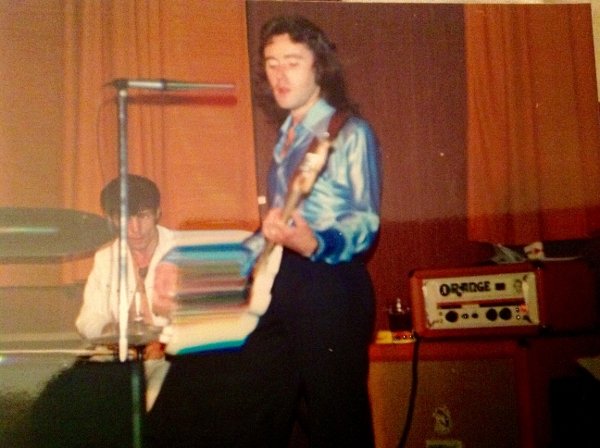 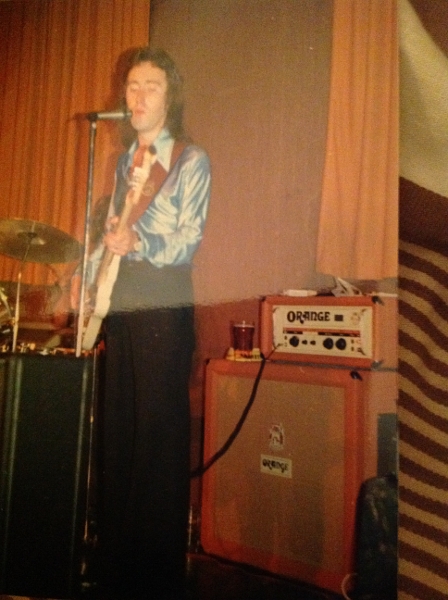 We played all the local social clubs in Middlesex and up to Hatfield.  Good old days - and I married the singer's sister in law! 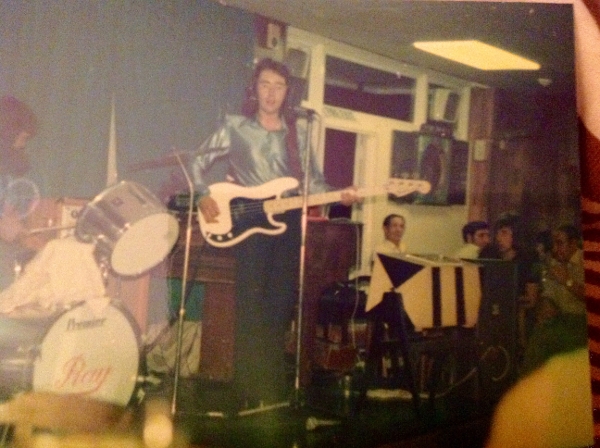 I live in Hayling Island on the south coast now and still keep my hand in by going down to the jam night at the local pub.