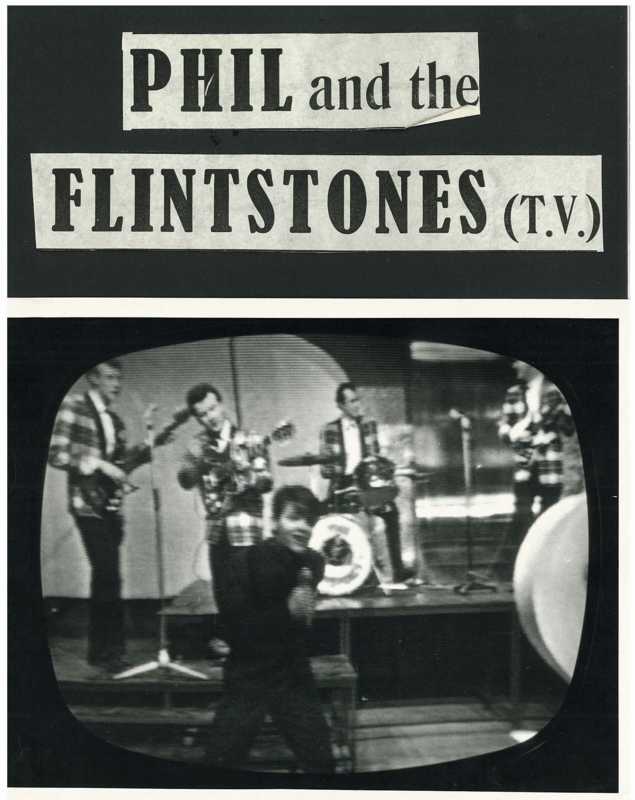 All information from Ken Smith

An Edinburgh band with members from Sighthill, Chesser, Newington & Meadowbank -  the band started in 1958/9.
The name came from the American stone age cartoon TV series. There was already a London based Flintstones
and the PG Flintstones from Port Glasgow.  So the band decided to become Phil and the Flintstones.
fronted by 15 year old singer Phil Clark. 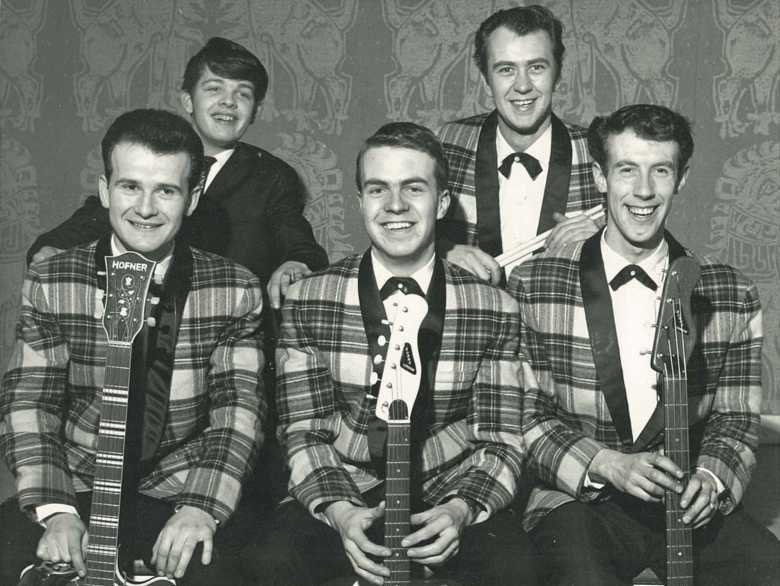 I replaced Kenny Wilson as lead guitarist in 1959. The bass player at the time was Rab McDonald, but he was soon replaced by Bill Morris.
We were a Rock/Pop band trying to make a "Liverpool Sound". We covered all the bands of the time - STONES/BEATLES etc. Phil liked to do numbers by Little Richard and Chuck Berry.  I remember one time we all went to see Chuck Berry play live at the Glasgow Empire.  I played all the Shadows numbers, Duane Eddy and even Bert Weedon (Guitar Boogie Shuffle!).  For my own part, I liked to take classical numbers, speed them up, add a rock beat, just to be different. I am sure the regulars at the Gamp Club did not realise that, while they thought they were ‘rockin' n' rollin’ to the Flintstones beat, they were actually dancing to "The Dying Swan" from the ballet Swan Lake!! I would also play some Chet Atkins or Django Reinhardt ,just for some class!!

I started playing in various groups when I was about 15 . I had my first paying gig when I was 16. I was paid 10 shillings - nowadays 50p but approximately a days wages at that time.   I had been taking guitar lessons from the age of 16 or so.  I was learning to play Classical style guitar, and also a little of other instruments such as Hawaiian guitar, banjo, mandolin and bass.  Before I joined the band, they used to play various clubs and the Empire Theatre.but also the interval during Bingo sessions at cinemas!  After I joined the band, we started to play at The Cephas Club (in the basement of St. Georges West Church, Shandwick Place, Edinburgh) and the Greenhill Club (near Holy Corner, Morningside, Edinburgh). It was there that we saw The Dean Hamilton Combo with their excellent lead guitarist.

We soon graduated to The Top Story Club - Fairleys and The Imperial Hotel. All at the top of Leith Walk in Edinburgh. Finally we arrived at The Gamp Club in Victoria Street. I think we were one of the first bands (if not THE first band) to play the Gamp whose Manager/Owner was Stuart Hepburn. Later we would cross the road to become one of the first groups to play The Place. While at the Gamp, we met up with Tam Paton and The Crusaders. Tam went on to manage The Bay City Rollers. The Crusaders guitarist (Frankie Connor) was another fine guitarist. 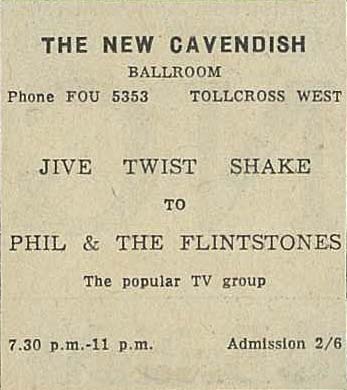 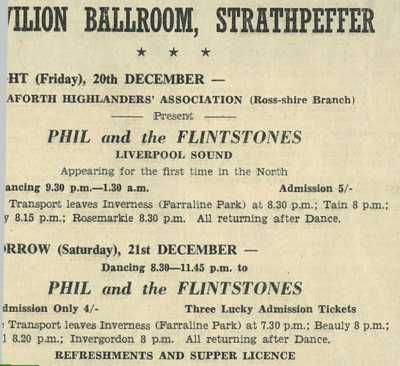 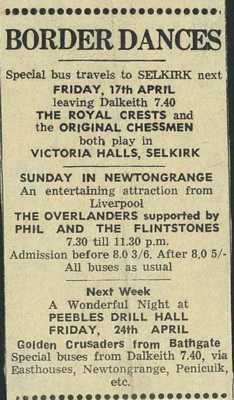 As things progressed, we started to play all over Scotland. We were regulars at The Lennoxbank Hotel on Loch Lomand. We did at stint at The Assembly Rooms, George Street,during the Edinburgh Festival. We also played at Murrayfield Ice Rink while the skating sessions were on. We played the American Air Base at Kirknewton and also the Navy base at Rosyth. We played the Eldorado Stadium which was normally used for wrestling!!

We now worked for an Agency and started to play as warm-up band for touring bands. We backed many acts, some of whom "made it"   At the Lennoxbank Hotel we met Dean Ford and the Gaylords who became Marmalade.   I remember The Four Pennies - a Manchester group who were also reasonably successful. They had a No1 hit with ‘Juliet’ and when we played the Edinburgh Palais, we came across Shane Fenton and The Fentones. He later re-invented himself as Alvin Stardust. I laugh at this memory because that night someone stole all the takings and we never got paid!! 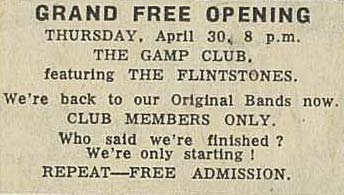 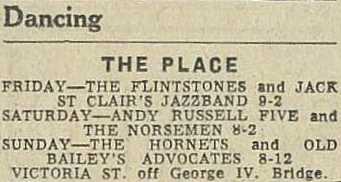 While some people think that playing in a band can be romantic and easy, the truth is something different!! A typical Friday for me would go like this...
work from 8am till 5pm with a printing company ...pick up the van 5.30pm...load van with equipment...pick up band members...drive to Stranraer (132 miles)...unload van and play gig till 1.00am... re-load van and drive home (132 miles)...drop off band members...get home about 5.00am ...easy as pie...!!!
While travelling to gigs we would eat our meals (usually fish suppers), practice songs and sometimes get dressed for the gig - all in the van!!
As I was the only one with a drivers licence I got to take the van home!! 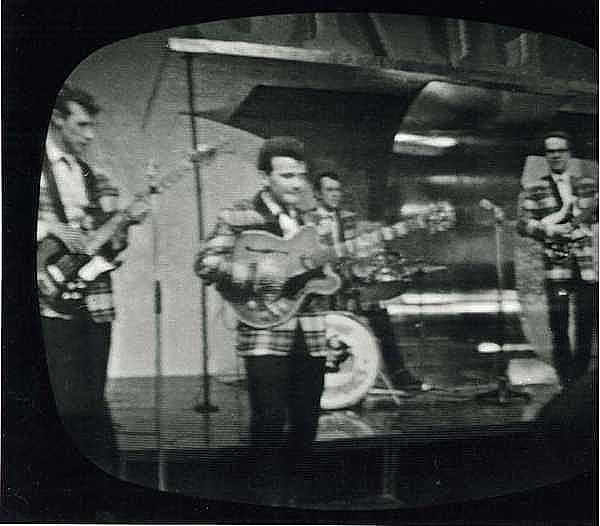 The 1964 TV appearance must rank as our finest hour (6 minutes actually). We appeared on the STV programme ‘One Night Stand’. This was hosted by the DJ Pete Murray and featured up and coming Scottish Bands. Lulu (and the Luvvers) were "discovered" the week before us. We were not discovered at all. We played two numbers - Sweet Little Rock n Roller (Chuck Berry) & Little Children (Billy J.Kramer). I think it was from this that we were offered a tour of the American bases in Germany - just like The Beatles. For various reasons we did not accept.  Rscots - perhaps Phil Clark - like George Harrison in his day - being only 17 was a major one of them.

We recorded some songs for The BBC at their studios in Queen Street, Edinburgh - I do not know if these were ever given airplay. We made a short film as an advert for The Milk Marketing Board - but again I don't think this was ever shown. Finally we made a demo record for EMI - although we played well the recording itself was absolutely awful. So I was not surprised it got us nowhere. 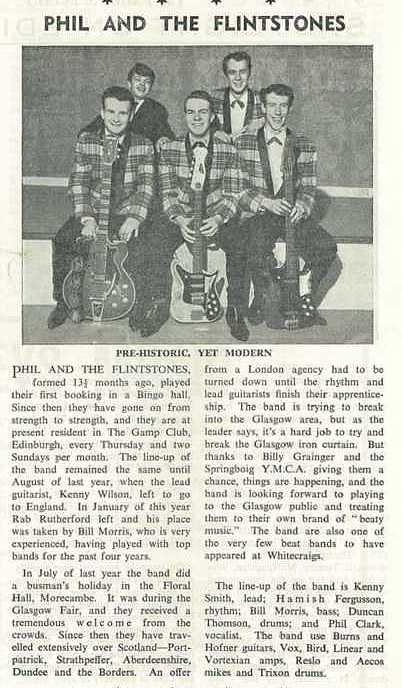 Our first our equipment was very basic. We used an ex army "Vertexian "amplifier which we played through two home made wood cabinets. Each cabinet had a 20" Goodman speaker and a 6" tweeter. Eventually we moved onto Marshall and Vox amps. I had a Marshall twin combo "Bluesbreaker" amp.and used a Watkins Copycat echo unit. Duncan played a Primier drum kit and Phil used Sure mics. I had several guitars during that time but mainly used a Burns Vibra . Bill also had a Burns bass. Finally I ended up with my Gibson S175DN which I bought in 1963. It has twin Humbucker pick-ups and a curved fingerboard. With it's blond finish and unusual tailpiece it is a classic guitar. The best guitar in the world!! 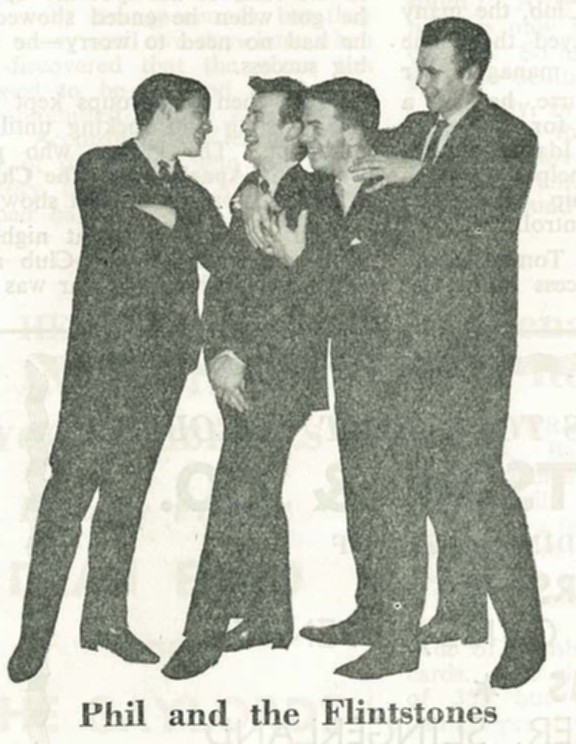 I left the Flintstones in September 1964 just before my 21st birthday and not long after the TV appearance.  Davy Thompson took over my guitar duties.  However, the group disbanded a few months later.  I joined a Country & Western Group "The Sidekicks" (featuring Ronnie Scott) and I have been working on & off ever since. I have played in every kind of band and every kind of music. I am currently playing with a fifteen piece Big Band and also rehearsing with a 7 piece covers band.

I have never seen Duncan or Bill since I left but I did speak to Fergie after the band broke up and I understood that he had stopped playing altogether. Phil went on to have a career as a Cabaret artist. He also landed a TV series with a girl singer (whose name escapes me) and Alan Stewart (now appearing in Cinderella at The Kings Theatre) I think the show was called "Three of a kind". They did comedy sketches and each was featured every week for a 10 week run.
In 2019 Hugh Moan recalled, 'The girl who was in a music/comedy show in the  1970s with Phil Clarke and Allan Stewart was Christine Sparkle and the show
was called "Hello, Good Evening and Welcome." '

Finally, Ken says, 'Phil & The Flintstones were a hard working band who made a good sound and brought enjoyment to many people. They were as great a bunch of guys you could meet in a month of Sundays. I was lucky to have met and played with them.'