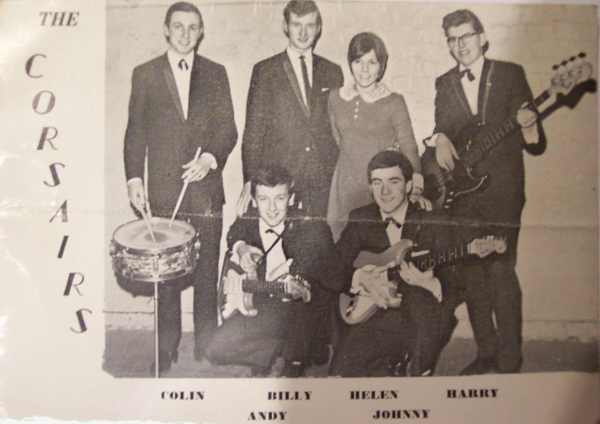 Colin has been in Germany these past 30 odd years and is still touring and releasing CDs with the Boogaloo Kings.  'Acidboogie', their 2006 slab of guitar and
harmonica drenched rhythm and blues is well worth your cash.  Cover below.  Contact http://www.boogalookings.de for details of how to buy yourself a copy.

On the other members:  Billy McWilliams had the Toll Bar in Prestwick.  Andy Currie junior went down to London and joined Gullivers People who had a resident gig at Tiffanys in Picadilly Circus. They also had a couple of singles and a few live airplays on radio. Sadly young Andy, (as he was called) died a few years ago. Johnny was really the leader of the band and had played with Tommy Truesdale and the Sundowners before the Corsairs.  Colin feels that Helen had a pretty rough deal - being Mrs Jamieson all these years!

Musical style -mainly top twenty with some rock later on like Les's guitar workout on Crossroads. 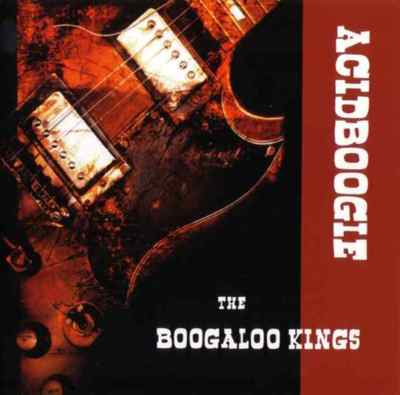 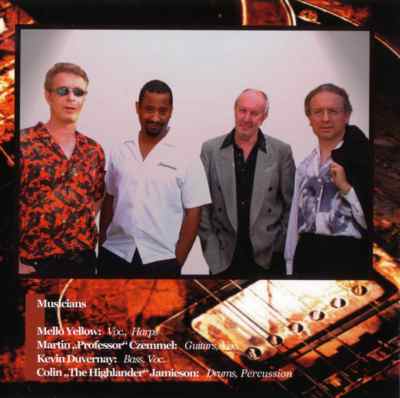 Colin Jamieson ex-Corsairs (2nd from right) in 21st Century Germany.  Still dressing sharp.
Below their 2007 offering that includes the best of their two studio albums in a live setting.
Note the extra adjective in the band name - well deserved too. 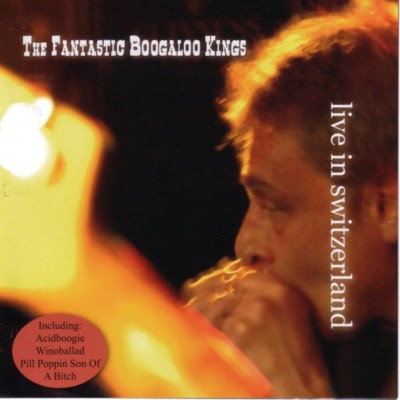 Here's a self-profile from another ex-Corsair and long time German exile Ronnie Shankland:
From Kilmarnock and played in the Sandriane Lounge in John Finnie street from 1967-1968 with the 'Transit Four' (note that car theme again - a Neil Young-like obsession) -  Hughie Paterson on drums, Ronnie Manson on bass (both Kilmarnock), Sandy Hunter on rhythm (Galston),  Ronnie Shankland on lead. Played the Eglinton Hotel in Irvine and Marr College Rugby Club dances among many others. Great stuff that was. Next band was the 'Hired Hands', with Kenny McKenzie on rhythm and vocals, George McAlpine (Springside) on bass, Alec Stevenson on drums (Irvine) and myself on lead. Played in the Maple Leaf in Saltcoats, and all up and down the West Coast of Scotland from Stranraer to Glasgow and also again the Eglinton Hotel where I later backed Billy Connolly in his early days when I was the ‘house guitarist and singer’.

I then joined the Corsairs and was with them for a year or two, playing in the Pavilion in Ayr on Friday evenings, the North Beach Hotel on Sundays and quite often in the Flamingo Ballroom in Paisley Road West in Glasgow.  Kenny McKenzie then asked me to join a group to be the house band in the new Caledonian Hotel in Ayr. That line-up was Graham Bell (Dunure)- vocals, Bobby Colquhoun (Maybole)-  bass and vocals, Kenny himself (Irvine)- rhythm and vocals, Brian Lowe (Maidens) - drums, Ronnie Shankland - lead and vocals.  I remember going to the Ayr Labour Club to persuade Brian to join. We played in the ballroom and the Fusilier Restaurant Cabaret room, backing Andy Stewart, Dana, etc. and we also supported bands like Status Quo, Head, Hands and Feet, Marmalade, Poets, Amen Corner, Slade, the Searchers, Merseybeats, Herman’s Hermits,  etc., etc., on Friday nights in the Ballroom. Quite an experience! Graham Bell eventually left and was replaced by Al Rae from Kilmarnock. We also got a good saxophonist, Kenny Roy from Troon. Colin Jamieson  (the Corsairs drummer ) was also with us for a few months at the ‘Caley’, as was Harry Hood the bassist. Later there was also another vocalist with the Kenny McKenzie Selection called Johnny Roche, an irrepressible chap fromNewcastle who was also a damn good comedian.

One evening Colin Jamieson who was now working in Germany asked me to join his group there - and I've been here ever since. They were called Nemesis: Colin Jamieson - drums, Helen Cowan - vocals, Bobby Colquhoun - bass and vocals,  Ronnie Shankland - lead and vocals.  We played in three types of clubs - for American Officers, for NCO’s and for Enlisted Men. Graham Bell also joined us for a while as did Les Morton the guitarist.  After a year or two we went on the German civilian circuit.  All good things come to an end – and I received an offer from a German band who were very, very good at that time in 1976 – “Goldfinger” – we toured all over Europe, playing the best nightclubs and hotels – from December to March in St. Moritz, Kitzbühl, Ischgl and Davos  - top locations indeed – and 2 months in Porec in Croatia in July and August – the rest of the year was clubs and dance evenings in halls all over the South of Germany. I stayed with them for 12 years.  Helen Cowan (Jamieson) joined us for the band's last year of activity. 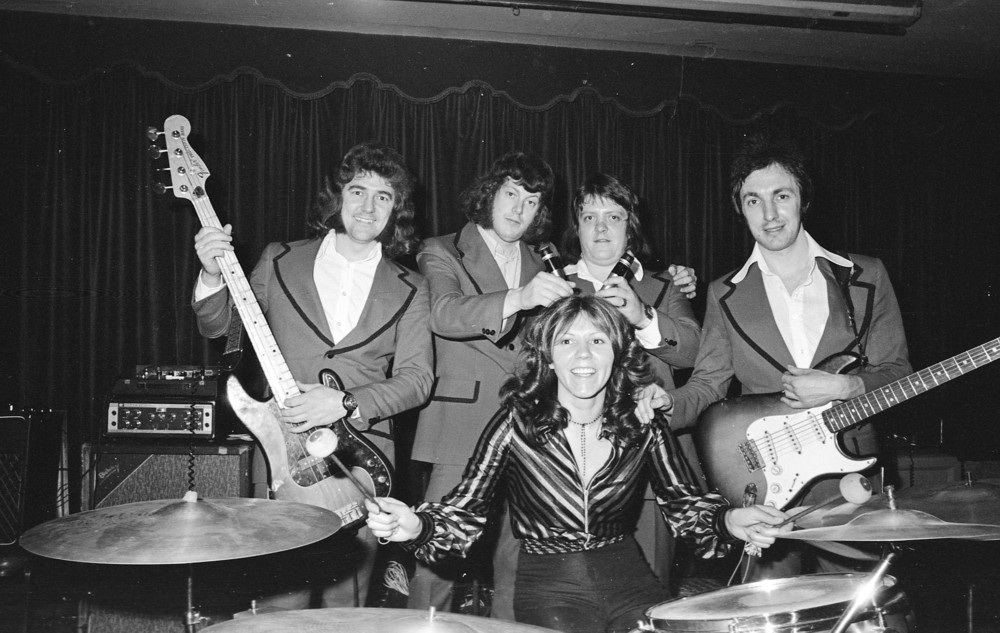 Nemesis 1974: all holding instruments belonging to other members.  Far right Colin Jamieson - drums (despite holding a guitar).  At the drums Helen Cowan - vocals.
Others are Bobby Colquhoun (bass player) , Ronnie Shankland (lead guitar) and Graham Bell (vocals) - but not sure which is which in the photo - help!!
Les Morton supplied the requested help in 2013: l-r:  Graham Bell; Ronnie Shankland; Helen Cowan; Bobby Colquhoun and Colin Jamieson.
Photo courtesy of Robert Jordan who took the pic while serving in the USAF.

I also studied a bit over the musical years and have my own translation agency with 9 native-speakers, from Portuguese to Italians. That, plus a German wife and 4 kids ,keeps me busy from Mondays to Thursdays until the music starts at the weekend.  I play with a trio - keyboard player, female vocalist and me on guitar and vocals.  I  also play session guitar for a couple of studios in Mannheim and two in Munich and sing harmony backing for German pop people. Though I'm very happy..... I sometimes miss the old days!  Oh, I also played with Duncan Findlay (good guitarist) of Stair Inn fame – his dad later ran the Pavilion Ballroom in Ayr when he sold the Stair Inn. And I backed the Baker Street king, Gerry Rafferty in the Eglinton and in Glasgow… just me, him and his roadie/soundman… he was good even then.  Cheers R.S.